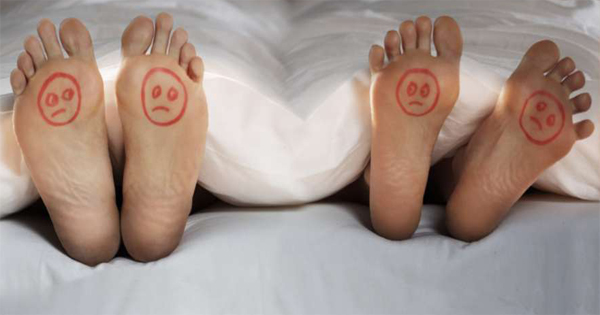 It started on one of those hook-up apps 😁

Doesn’t everything nowadays? It was a rare night. I was lonely, looking for attention and craving conversation that didn’t revolve around banalities when I started chatting with this witty guy, with a great sense of humour. We managed to get through quite a few conversations without sharing specifics. We didn’t know each others’ names but we were talking like we’d known each other for years.

Before I knew it, I was meeting this guy at a local coffee shop ☕️

What I thought would be an hour long chit-chat session leading up to a hook-up in the future, ended up being a complete dinner 🍕 🍷🍧with a great conversationalist.

We met a couple of days later again. It was one of the best evenings of my life. That night ended with a kiss 💋💋

Even the slightest touch of his hand had me tingling all over. Of course, I was craving for more. 😜 😍

And between these two dates, The Talk happened — where we discussed the possibility of having sex. As neither of us was the kind to beat around the bush we dove right into the conversation. It started with discussing the possibility of sex and ended with our expectations.

And then he asked The Question… 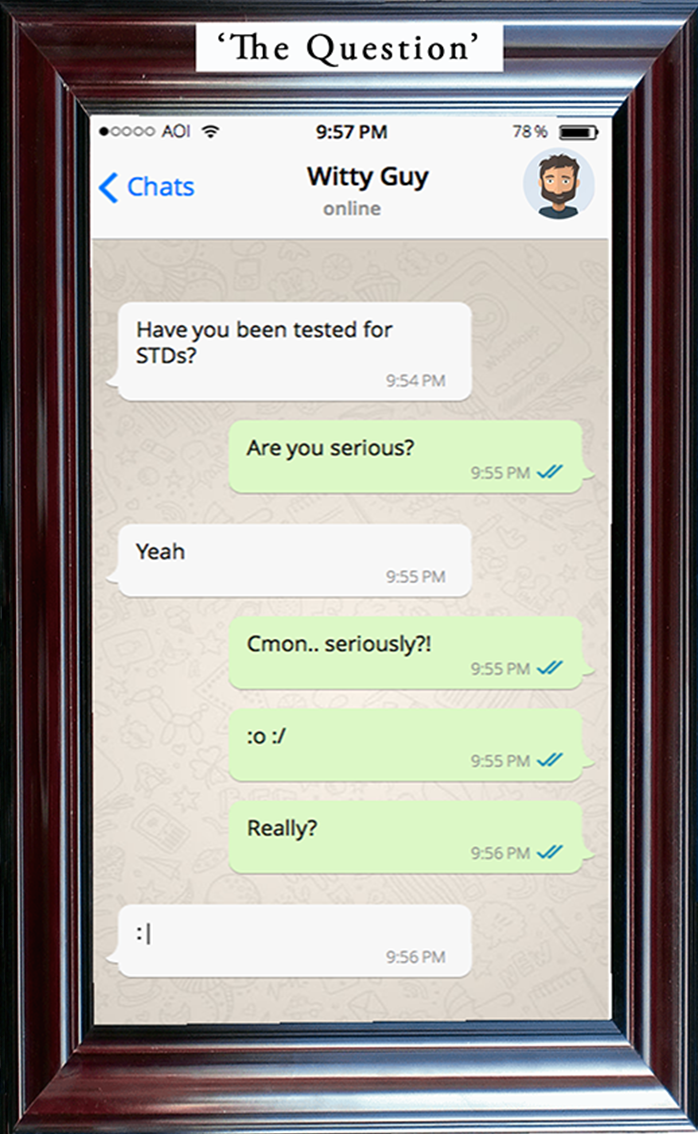 I asked him ‘Seriously?!’ more than a few times as WhatsApp’s blank walls wouldn’t convey my shock and disbelief.

I, the one who always used protection and didn’t particularly sleep around, was being asked this question. I was offended.

But in a while, rational thought and logic returned. I replied honestly.

This random person I met online was asking me questions that I never thought would be involved in meeting new people off an app. But by then the seeds of doubt were planted. 😟😓😥

Why didn’t I do this before? Why didn’t I want to be sure? Trust doesn’t act as a shield against infections. We do whatever little that we know to do to protect ourselves (though we could always know more – why don’t we?). But somehow we never even want to entertain the idea that something could go wrong 🙈🙊🙉

We ask our partners ‘The Number.’

Like knowing how many people they’ve slept with can be an accurate indication of how risky it would be to have sex with them. We forget, it takes one mistake. 😖

Instead of throwing arrows in the dark, why not just ask for some simple tests? No matter how clinical, uptight or unsexy it seems.

I somehow managed to recover from this train of thought and got around to doing something that I should have done a very long time ago. I set up an appointment with the gynaecologist. 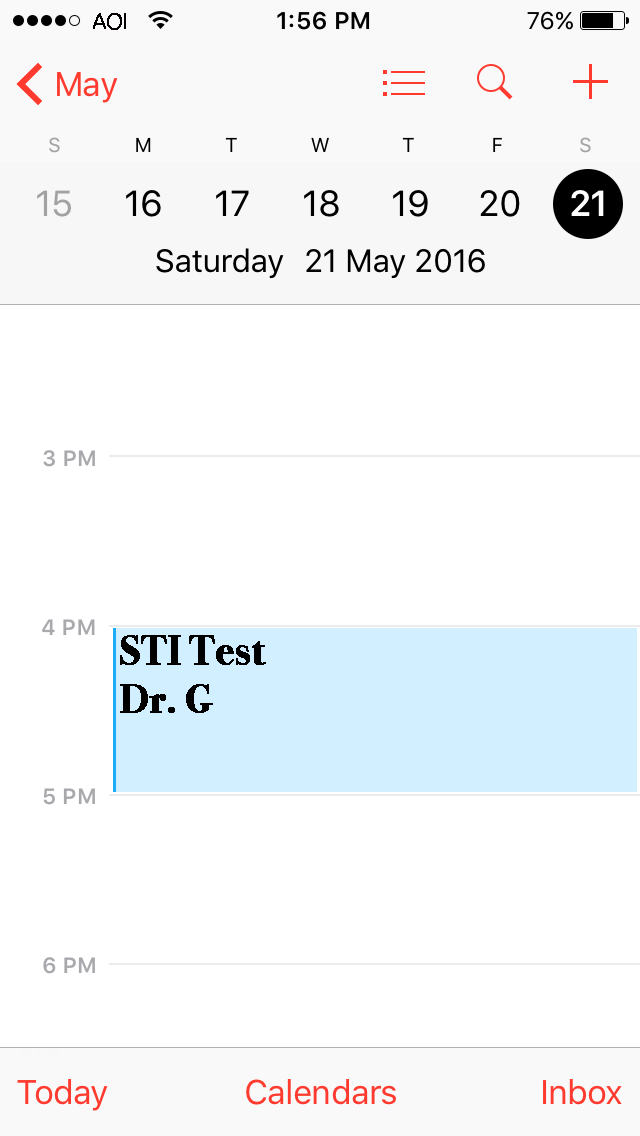 Then I started to ask around. I had some strange conversations with a couple of my friends and realised that none of them have set up an appointment just like that for a check up. To step into a gynae’s clinic without having an ‘issue’ like say, a UTI (Urinary Tract Infection) would open a can of worms for anyone who lives in a highly protective family with boundary issues – which, let’s face it, is most Indians. Being sexually active is something that doesn’t exist for family. 🙅

But this time I invented an excuse and took my horrified, scared self to the doctor. 💉

One would wonder why was it such a big deal. After all, if you can have sex, you can go to the gynaecologist, right? The fact is over the years, I have heard/read/came across multiple women who have been judged or told off by their doctors for being sexually active without being married and along with all the social disapproval to dodge, this adds to the reluctance. That’s the sad truth. 😔

People judge; doctors also judge. Who would willingly submit to a lecture on morals? I certainly didn’t want to! And worse, everyone knows everyone when you live in small neighbourhoods. What if the fact gets out? No one wants to lie naked on a table unless there is a compelling reason to do so. The excuses are endless. But we are adults. We should be responsible for ourselves. And doing this is as necessary and simple as getting teeth cleaned.😬😎 Finally, the appointment happened. My doctor was sharp, quick and thankfully, too methodical to let things like awkwardness, judgment or discomfort creep in. However, it’s also true that, till you reach the doctor’s door, you have to deal with various funny and weird euphemisms all basically aimed at finding out if you are sexually active. 👫👬 👭 People’s inability to utter the word  “sex” is incredible 😑

But anyway, I managed to take these with a big pinch of salt and extra large serving of humour 🍔🍟

Did I hook up with that guy? Somewhere between all of this, it became irrelevant to this story. I know that’s not what you want to hear, but, well, my focus just shifted.

But what he helped me do means a lot more to me than a few orgasms would have (though those are always nice). Empowering someone to take charge of their life, health or safety is probably the best gift ever 🎁

While it took me some time, offence slowly turned into gratitude. How many times do you meet someone on some random app and that person turns out to be entirely responsible and concerned about your safety? After this encounter, I resolved to: 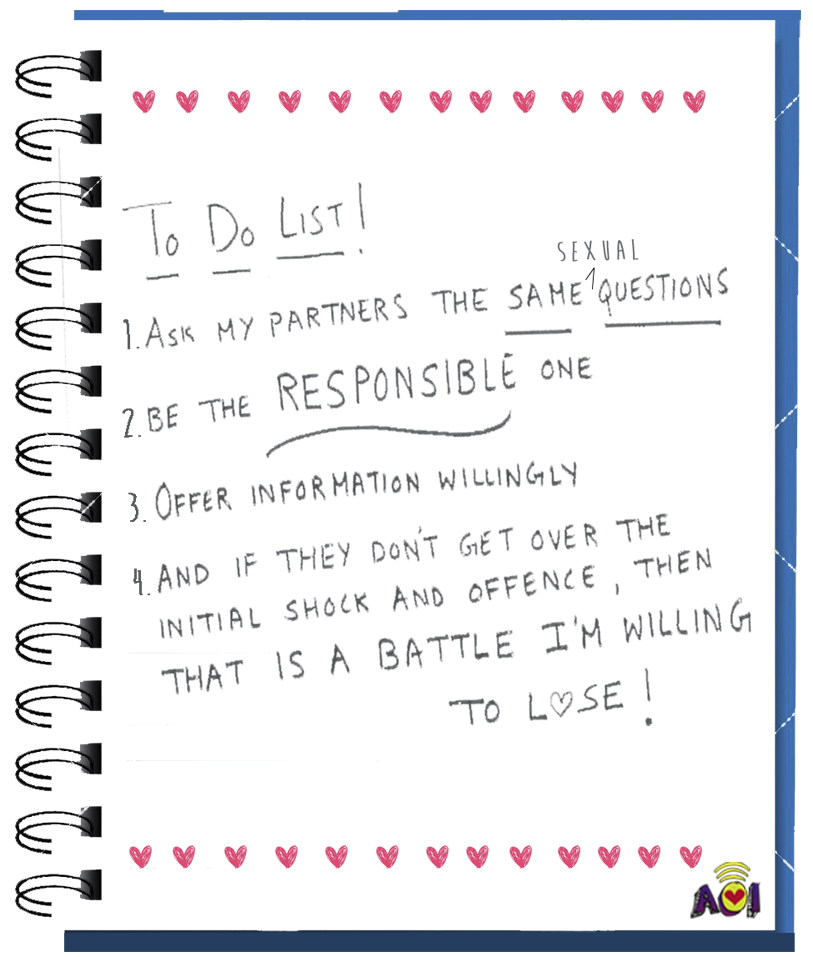 If you have been skeptical about visiting a gynaecologist and taking charge of your sexual health, here are a few pointers:

Read up, get to know and go for it.  It really is that simple. If pleasure is a priority, so should be the responsibility that comes with it 😏

PS. –To get started on learning about STDs/STIs in a simple, one click way, check out AOI’s post Things To Know About: Sexually Transmitted Infections

Luna is in her late 20s  lives in Mumbai with her overprotective family, works in digital media and writes about love, life and other things to make sense of them. Terrible at this boy thing, she is a Gretchen constantly looking for her Jimmy. (If you truly get this reference, she requests you to get in touch with her).