WE MET ON GRINDR. NOW THE INTIMACY OF THE SEX WE HAD MAKES IT HARD FOR ME TO FORGET HIM - Agents of Ishq
Menu 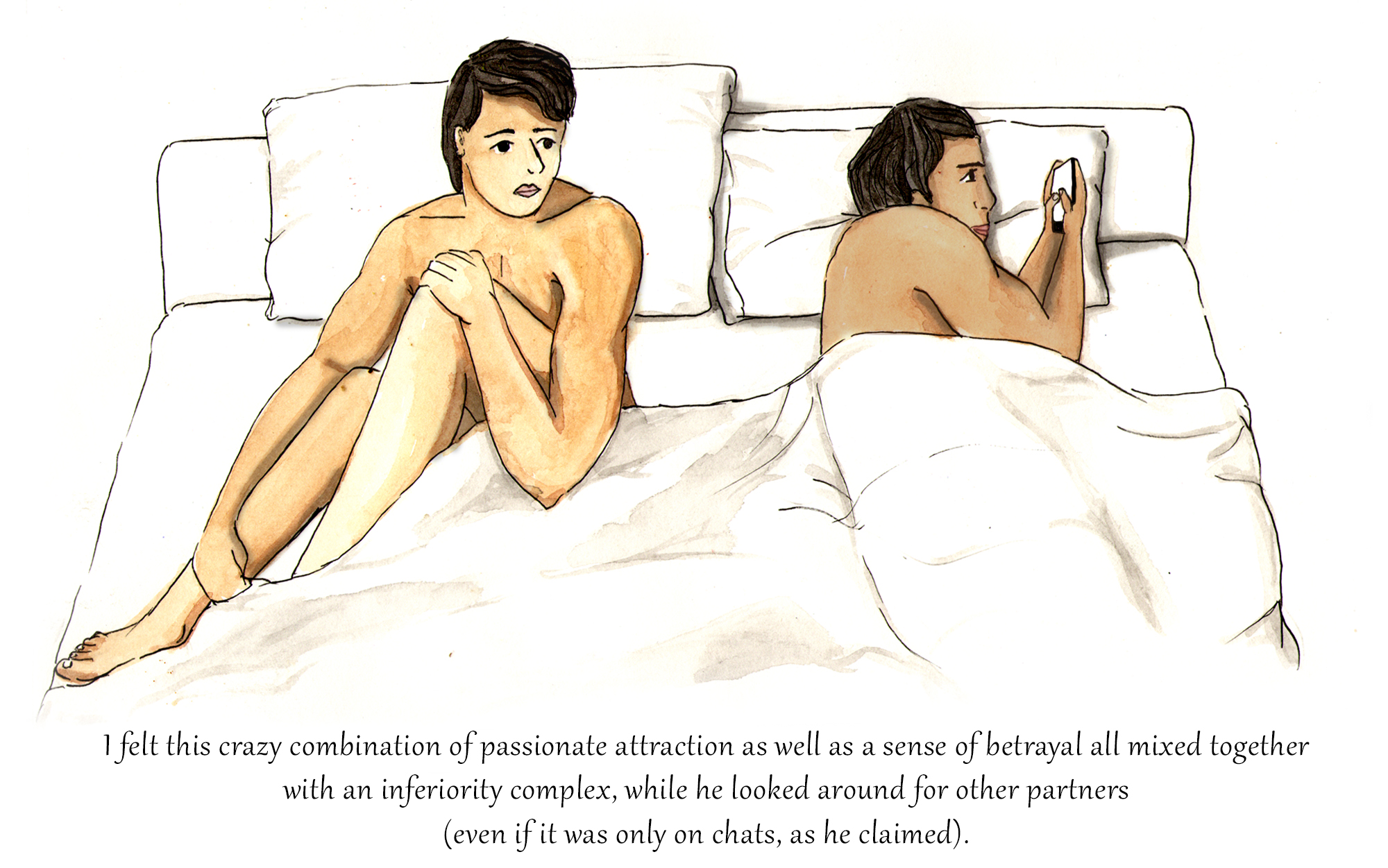 It was 2013 when AD and I matched on Grindr. It was just another casual encounter that would start with asking each other location, preference and most importantly pics. From the beginning I have always used my own pictures. Since I am discreet, many like me, warn against using my real pics but then my logic is simple. The only people who would know I am on the App are those who are on it themselves. Bhagwan ki daya se I’m quite decent looking, so I do get a good response. I don’t approach though, only respond to those who approach me.

So anyway, I met him on this app.

He was in Mumbai for a limited time, interning at an office close to mine. We quickly moved from Grindr to WhatsApp and there started a mesmerising silsila of Voice Notes and pictures on the phone. It was very romantic.

He would often say things like “Mujhe toh tumhara nasha ho gaya hai…” (You intoxicate me, I’m under your spell). “I can’t keep my hands off you.” And he never did!

Soon the time came to take this offline. After about a week or ten days of exchanging mesmerizing audio and pictures of each other, we finally decided to meet. I was to pick him up outside his office in Dadar.

We met and kept meeting. I had never ever experienced this rush before in my life. He would finish work and just scoot over to my office. I would give him WiFi access and he would wait in one of the cabins at the reception of my massive office till I was done. I would wrap up as fast as I could and we would dash off in my car to the romantic getaways of south Mumbai.

All the while as I drove, he wouldn’t keep his hands off me. Not even when we got out of the car. Whether it was Marine Drive, where we sat listening to music and facing the sea, or at Scandal Point or the TATA garden in Breach Candy, or a movie theatre in or the nondescript countryside-like precincts around RC Church  – he would kiss me and make out at the slightest opportunity, without making it awkward for others around us. He would steal those moments very skillfully.

One time is still stuck in my mind. It must have been mid-June of 2013 – the always erratic yet sometimes romantic rainy mausam of Mumbai. We were parked in the lane opposite the Tata Garden. We’d bought some shrikhand at Breach Candy. In the car, he asked me to smear a bit of it on my lips, and proceeded to lick and eat it off my lips, very many times.

Often we would have a snack at the reasonably priced Status Restaurant and drive around some more before I dropped him off at Churchgate station so he could go to his aunt’s place in North Mumbai. The hardest thing for both of us was this moment of seeing each other off. 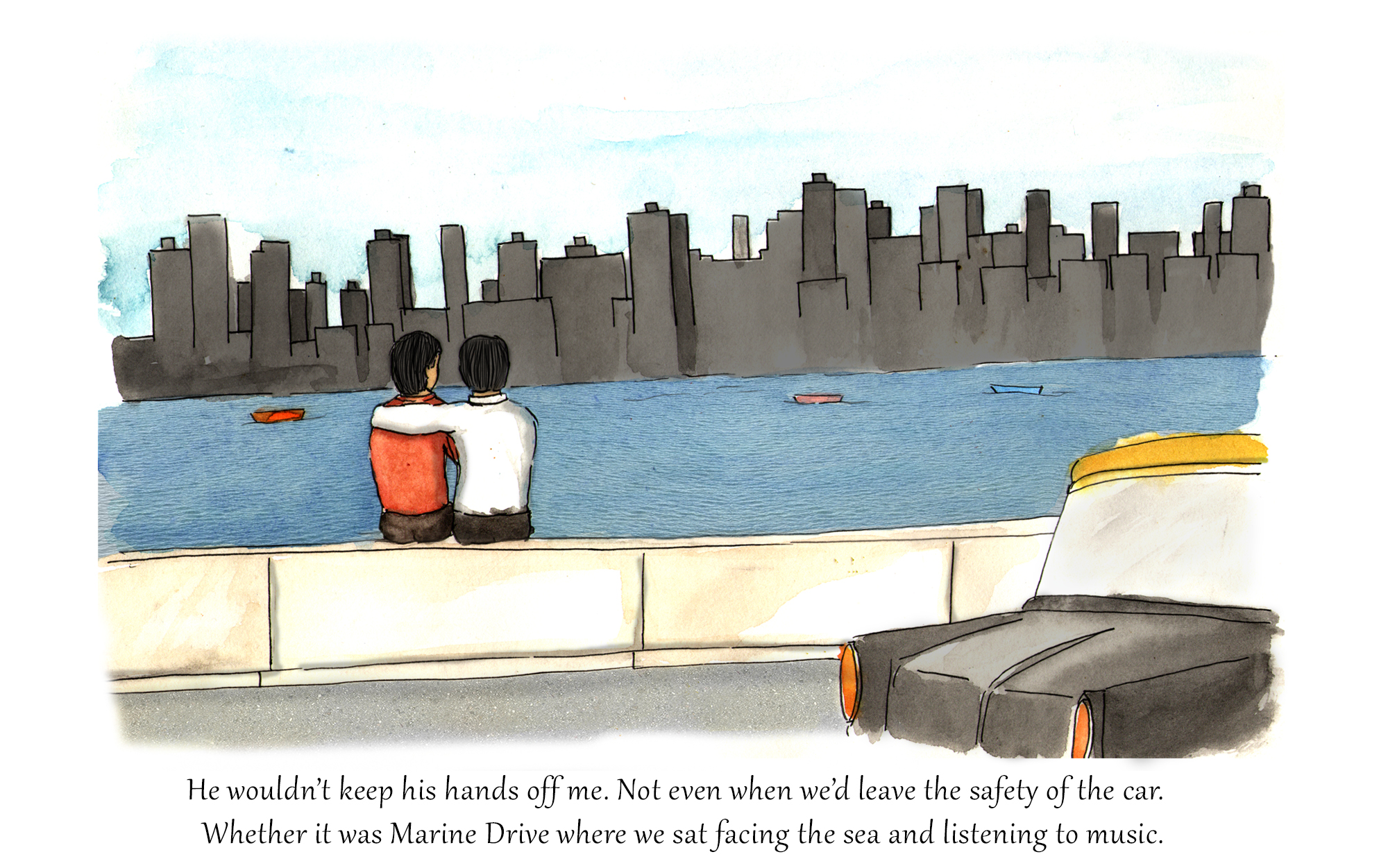 But our courtship didn’t just end at kisses. He meant to take it further. Full intercourse. Something that I hadn’t really done before. He’s younger than I (25 to my 34) but far more street smart, and he knew a lot more about sex than I ever did. Although, he came to my big city from a small town, between puberty and adolescence he’d seen, heard and experienced several facets of sex, that were still unknown to me, early in his life.

Between the two of us, he was the quintessential ‘top’ and I was the ‘bottom’ — everything between us also was like a stereotypical ‘boy’-‘girl’ relationship. He had wooed me into meeting him, and now, sleeping with him seemed like a natural extension of what we had between us. We’d become great friends who loved to spend time with each other outside the bedroom as well.

It happened. He penetrated me. Finally, I had penetrative sex for the first time and climaxed the way I felt I should. It was a bitter-sweet experience. Bitter, because after all it is every bit as real as a tool going up your arse, and sweet because of a mental and emotional frisson it gives you. If done slowly, correctly and regularly one comes around to enjoying it.

He explained the importance of being clean externally and internally before trying it out. He also ensured that during foreplay, my opening was relaxed and ready to be penetrated and tried out different positions so that we could do it successfully. In every sense, he has been my sex-mentor. He was the one who introduced me to a gel called Xylocaine that, when applied to the anus, makes it numb to pain. He was also the first guy whom I enjoyed giving a blowjob to. His full lips made every kiss to every part of my body extremely stimulating and special, since I also experienced an emotional connection. He was smart enough to use protection and both of us knew there was no other way. 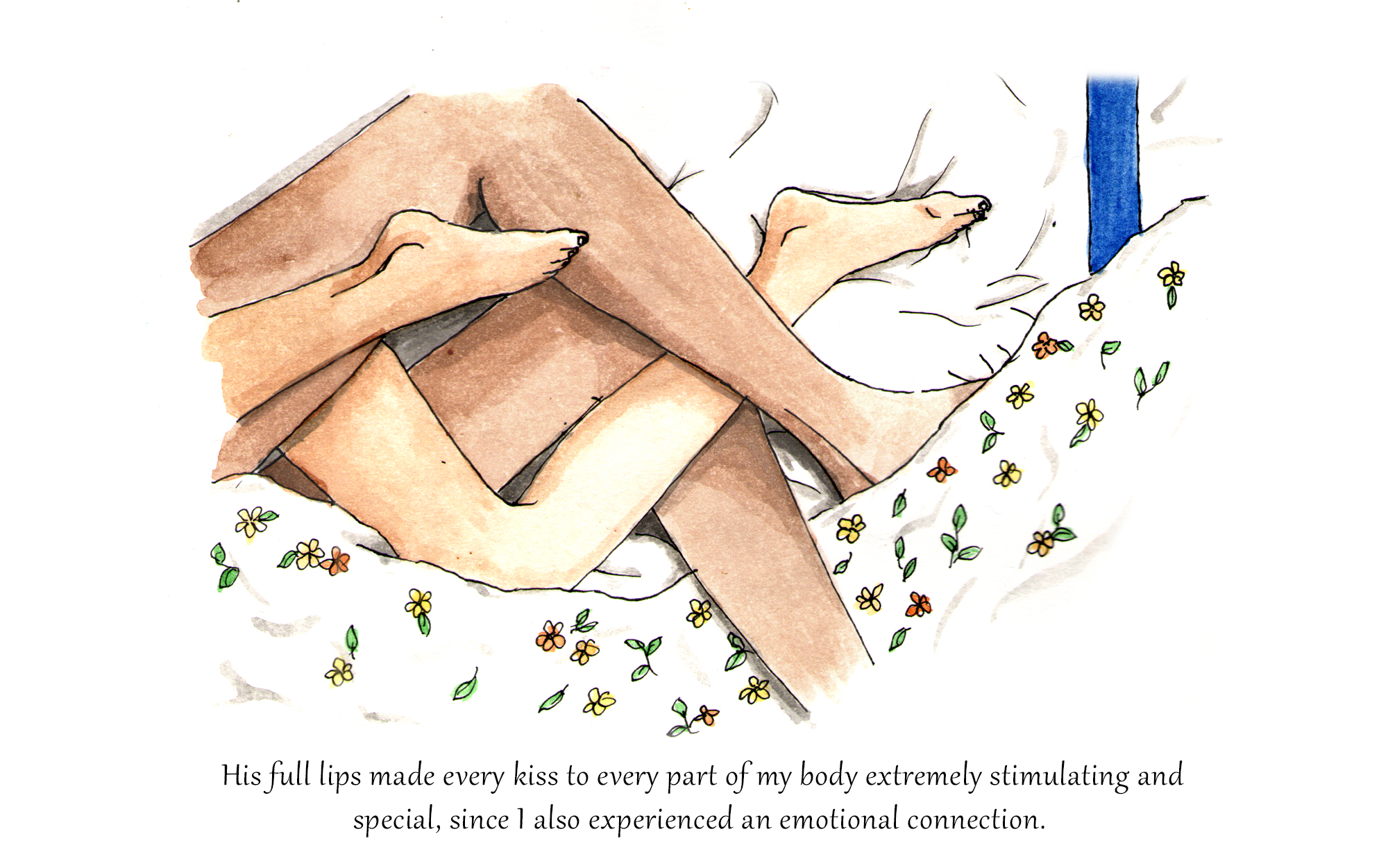 I was determined to get there out of a feeling of intimacy and intense connection. But now in hindsight, I think, maybe that feeling wasn’t mutual.

After that first time, we had intercourse like this exactly six times more and I could feel his passion to penetrate me diminish each time. Much as I wanted to become his best bet in bed, little did I know that for him, it was essentially and always about moving on.

After those few sexual encounters, we would only go till a certain point — of foreplay, like kissing and having me go down on him. Then he’d retreat. He would put off going further each time, often saying he was not in the mood. Maybe that was already the death knell, I don’t know. Since typically in many gay male relationships, sex plays an important role.

The idea of being rimmed deeply — where your partner makes passionate love to your butt and gently opens you up (with fingers and tongue) for the final intercourse, the urge to give your partner the blows that give him a full erection, and the great satisfaction of taking an act of sex to its final outcome (climaxing with penetration) — was like getting a glimpse of intimate delights and then being learnt and left in the lurch, half-way to paradise.

Sure, I continued to get a lot of attention from others, but my heart and body were still set on him, perhaps more so because I felt this lethal combination of passionate attraction as well as a sense of betrayal, all mixed together with an inferiority complex, while he looked around for other partners (even if it was only on chats, as he claimed).

Even as all of this unfolded, we remained inseparable, and that was what led me into a spiral of ambiguity. We spent all our time together. We kissed, cuddled and practically lived with each other. We claimed to be each other’s biggest priority, even as the wholesome sex had flown out of the window, taking my peace of mind along with it.

One night, I slyly checked his phone and came across chats where he said he wanted to rim a guy “for at least an hour”, marry another, and wanted to make one in particular “his bitch”. It shook me. And also woke me up. We had a loud fight.

Then another time, on a drunken night, he admitted to meeting a guy who was so thin that he’d lifted him up and fucked him. He seemed to have little qualms about revealing this even as we continued to feel friction because there was no such action between us.

But we didn’t want to let go of each other just yet, so we continued being together almost everywhere. After a while, though, it all became too complex for me. Yes, there was no sex but we did have our share of kisses and cuddles and intimacy in bed. The PDA was over, but genuine concern for each other was and is still there. At the same time, him wanting to do things with others; the same things that I sought from him, drove me up the wall.

The relationship (if I can call it that) started to diminish after almost 2 years when he finally moved to another part of the city for a job. While we met much less, we still chatted everyday. I ‘tortured’ him for not being physically interested in me, and kept badgering and nagging him about his interest in others. What really made me insecure, jealous and extremely terrified was the thought of him giving intimate pleasures to some fair slim twinkie, a PYT who I felt was laughing in my face, able to enjoy what I sought from this one man and couldn’t have.

Interestingly though, by now, we had several common friends who were all on a WhatsApp group and met on regular outings, so we somehow still managed to speak to or text each other every day.

Sometimes we think of sex and love as different and maybe they are. But some loves are sexual, where emotion, body and connection become powerfully joined in the intimacy of sex more than anything else. It is an intoxication, a nasha that’s hard to forget, because it runs deep.

Today we are in different countries and I still chat with him on WhatsApp. We are still part of that common friends group on our phones. And we follow each other on social media. But when we chat privately, it almost always turns into a bloodbath of words, because I still cannot get over the fact that he’s just not that much into me anymore.

PS: He always ends it by saying that I’m very attractive and there’s nothing wrong with me and any guy would love to have me, but it’s just that he cannot do it more than a few times with anyone.

Nice try, I want to say to him!

Complex Character is the guy who chose commerce over arts. He now writes, sometimes gets paid for it. He loves to travel but sadly his job doesn’t take him places.

The names and characters appearing in this post are for representational purpose only and the post has no bearing on their sexuality or health status.

2 thoughts on “WE MET ON GRINDR. NOW THE INTIMACY OF THE SEX WE HAD MAKES IT HARD FOR ME TO FORGET HIM”