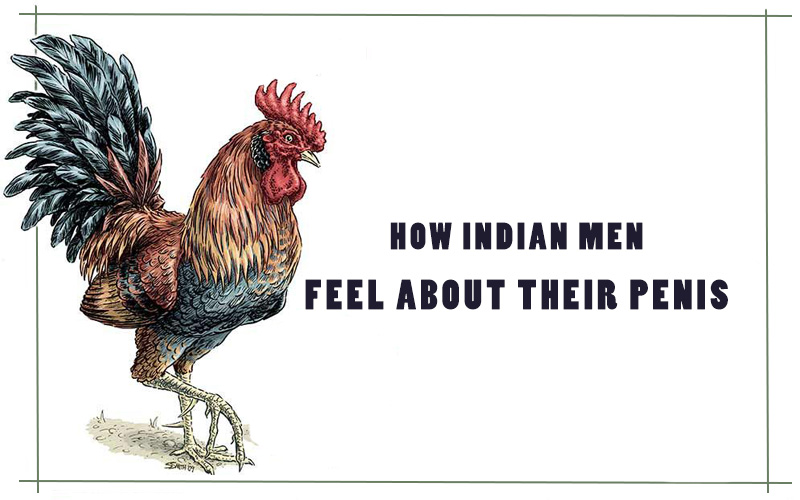 THE RESULTS OF OUR UNIQUE, ZARA HATKE, FIRST OF ITS KIND INDIAN PENIS SURVEY

Collated and analysed by Pat Sen and Paromita Vohra

A while ago, at the exhortation of one of Agents of Ishq’s many online friends, Anand Krishnamoorthi, we set out to do the First Indian Penis Survey. Why did we do this?

There are so many standard things said about men and sex and sexuality and so much more rarely discussed that we thought it would be a simple, fun way to get a conversation started. About what those who have a penis feel about it. What influences their relationship with their penis and by extension – their sexual selves – society? Culture? Relationships? Childhood? Family?

The idea was to take the conversation away from the usual space of swear words, nudge-nudge-wink-wink jokes and cliches about prowess, size and performance and bring it to a more human place where it is hardly taken: to talk about the body not as the object of other people’s scrutiny or approval, but to begin talking about our own relationship with our selves in terms of sex and the body.

While composing the survey these are things we tried to do:

A total of 1023 people took the survey online.  Here is what they said!

Under Other, people wrote choices like Polysexual, Bicurious, Pansexual, Heteroflexible, Homoflexible, Queer, Honestly Don’t Know. Some people also chose more than one options as follows to indicate their sexual fluidity, that they experience their sexuality sometimes as one and sometimes as another: A majority of the respondents said they had a comfortable relationship with their penis.

A few people chose more than one option, indicating a shifting relationship. Some of the other responses we got were: Complicated, Taciturn, Weird, Adventurous and Rocking, Touchy-Feely, Ambivalent. There has been a big shift in sexual culture in India – whether we want to call it a sexual revolution is up to us. Despite that, we see, that even in an anonymous online survey in English, on an unconventional platform, discussing sex openly, like Agents of Ishq, a significant percentage said they rarely looked at their penis indicating a discomfort with the body in a sexual sense.

As a practice in India although young children roam about naked casually, post-puberty there are no social – and overtly non-sexual – contexts where boys may be naked before each other, unlike school gymnasiums, locker rooms and common showers in many other countries.

On the whole less that 1% of the men who responded felt the need to brag, even obliquely, about their size, or their prowess. 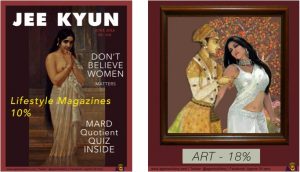 Some notable influences were also, Lord Voldemort and Tantra. 4 people said they were influenced by nothing and felt their penis was ideal.

A very small number of respondents also talked about how when they were younger, pornography affected their ideas, but as they grew older, relationships played an important part in altering how they felt or thought about their penis. Strong positive reactions from partners were mostly about emotional reasons(59%). Only 24% of the time was the strong positivity derived from the physical – size, attributes, etc.

What we found on reading through the qualitative responses was that those who said their partner felt positively about their penis, also seemed to have a relaxed and communicative sexual relationship with their partners, the sense of being sexual playmates as lovers. The responses tended to be emotive, interactive, fun and affectionate. 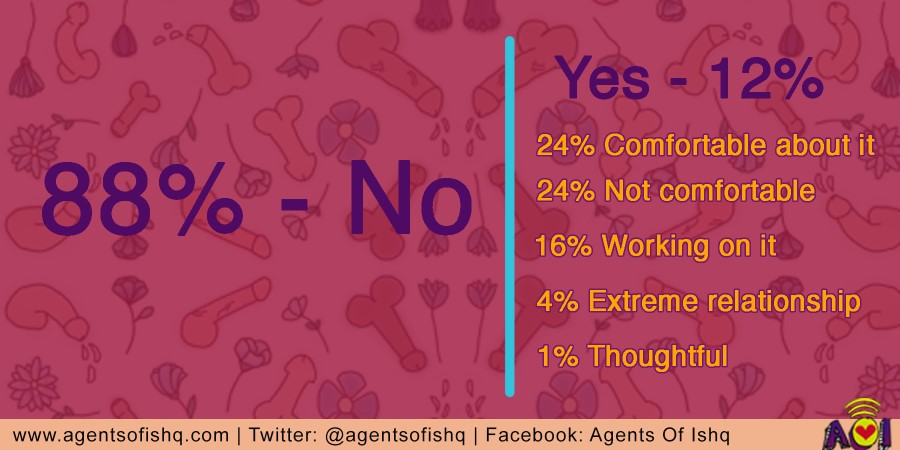 This was a reassuring response and we would conjecture, perhaps the positive flip side of the point made with respect to Question 4 – that there are few contexts where adolescent boys and young men see each other naked and so the opportunities for such cruelty are fewer.

Of those who said they had been shamed or bullied, 40% said they were now already comfortable or getting more comfortable with time, even though a bad incident had made them lose confidence. Some said they hated their penis before but are learning to or do love it now.

24% of those who had been shamed or bullied said they were finding it hard to get past it.

But a good 36% avoided answering the question indicating that it is still a sensitive area which they aren’t comfortable articulating perhaps. 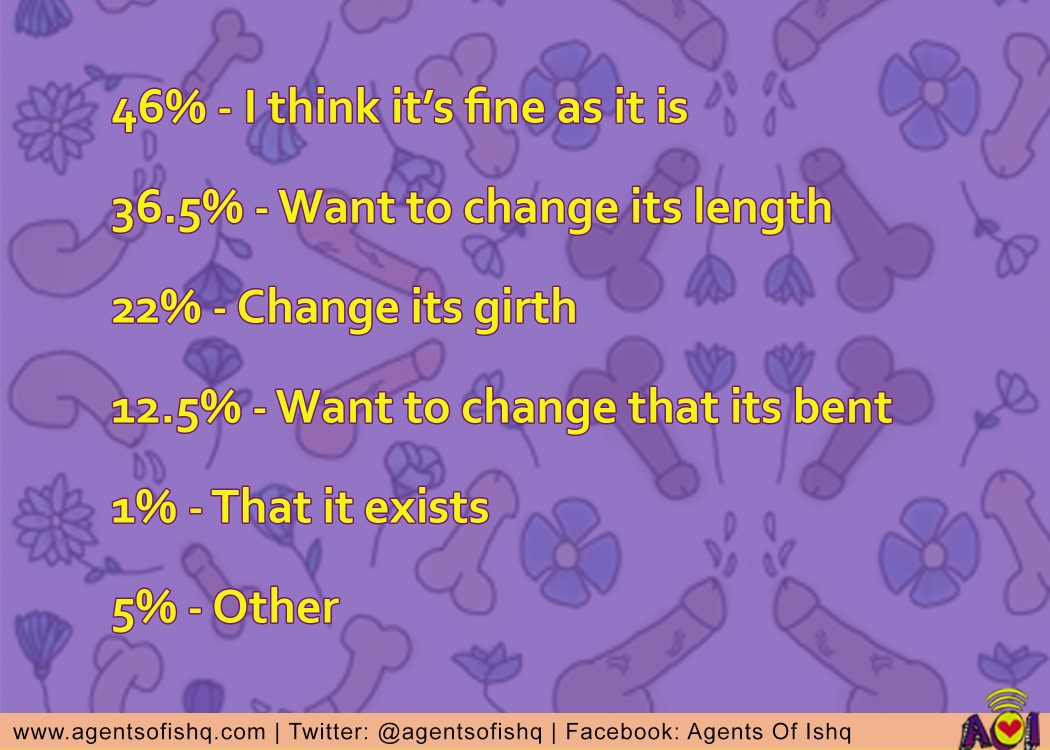 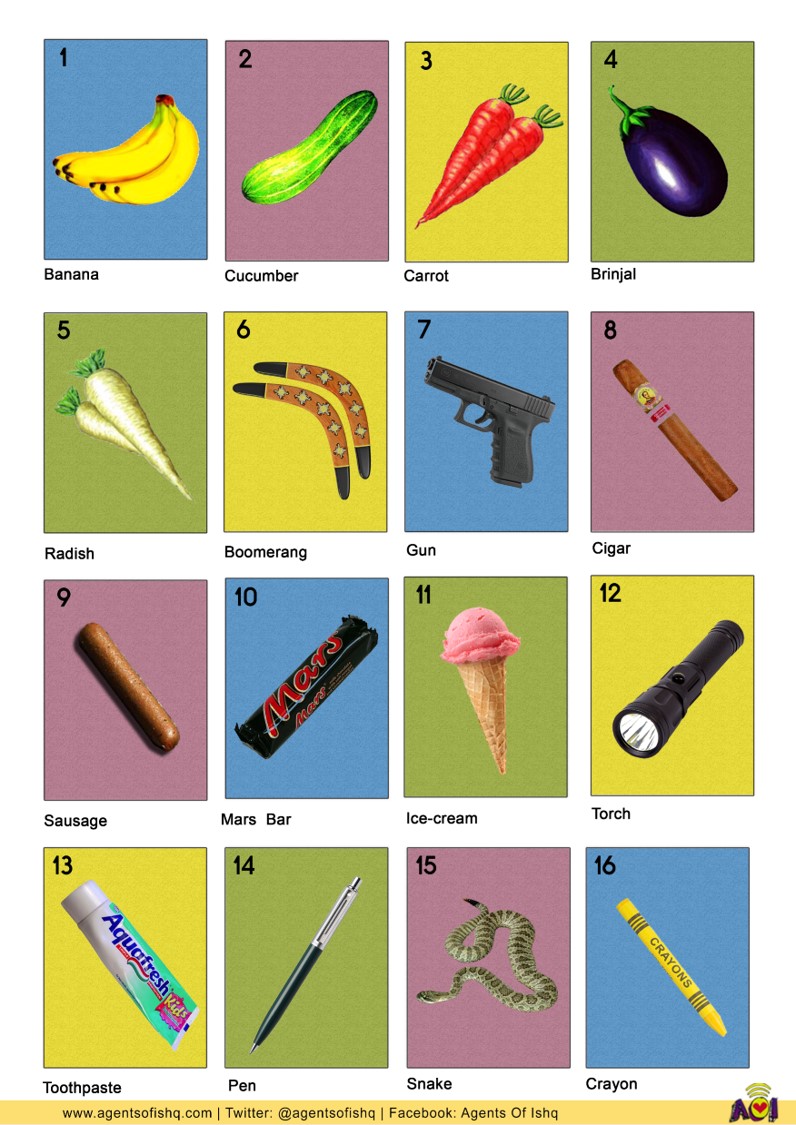 Half the men did not have a name for their penis at all. Of the half that did, almost 60% of them referred to their penis as a penis or such synonyms and slangs commonly used in English and other languages (dick, pecker, cock).

Notably, to the question whether they had a private nickname for their penis 82% said: why would I do that?/No.

Of those that did name their penis – either generally or with a private nickname, almost a fifth used affectionate terms. 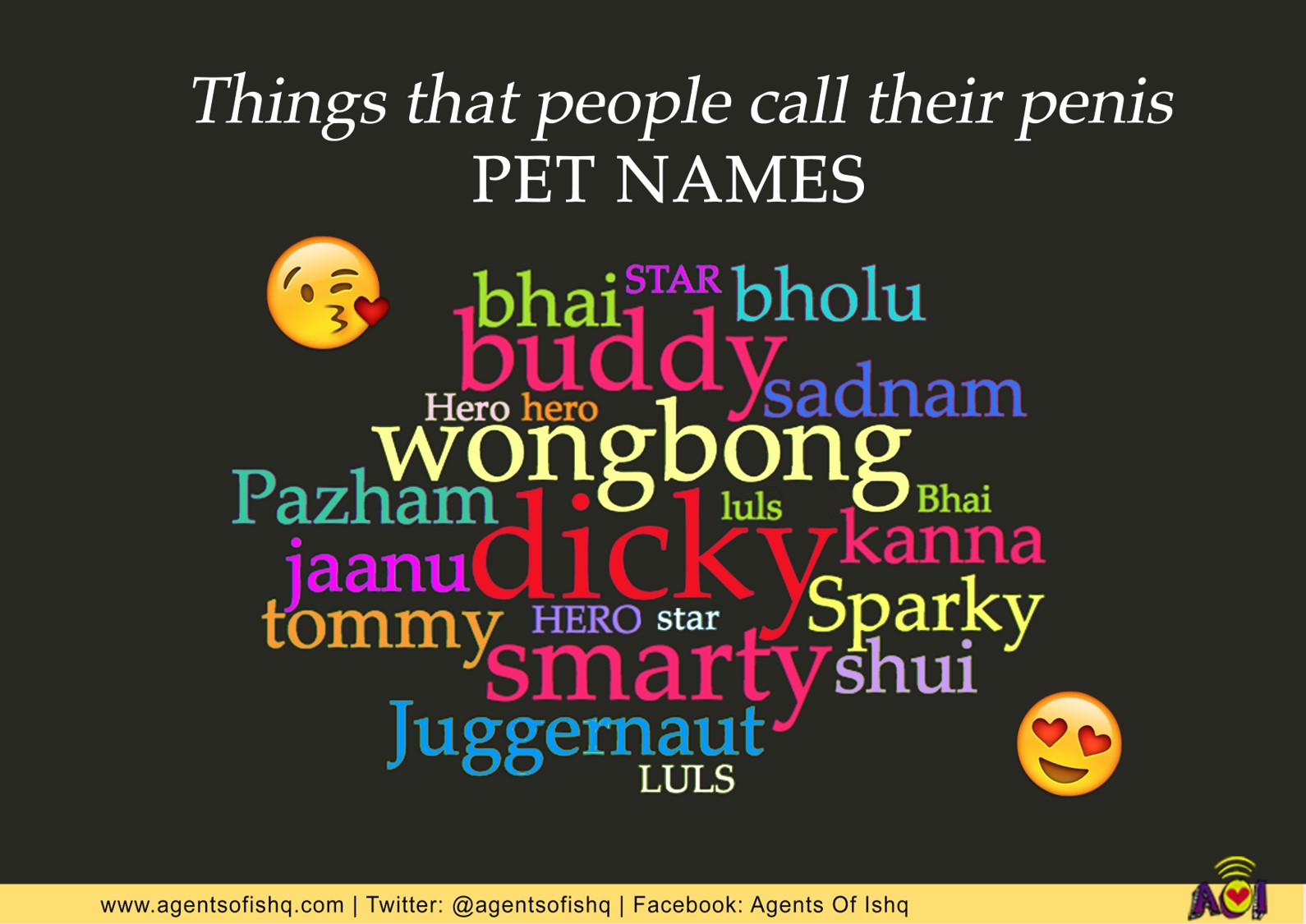 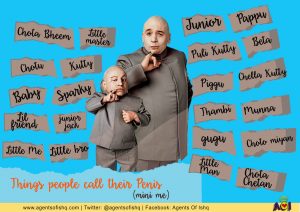 Some also used military terms and commonly occurring proper names, usually their own name, or some familiar name. Some used folksy names – like fruit and vegetables and animals. Few named them as an inanimate object. Since there is a specific question in this survey related to this, it is perhaps an indicator that men do not find it easy to name their penis after inanimate objects. If these, some used industrial or machine and tool similes. Some of these were aggressive – like jackhammer. Some were improbable, like telephone. 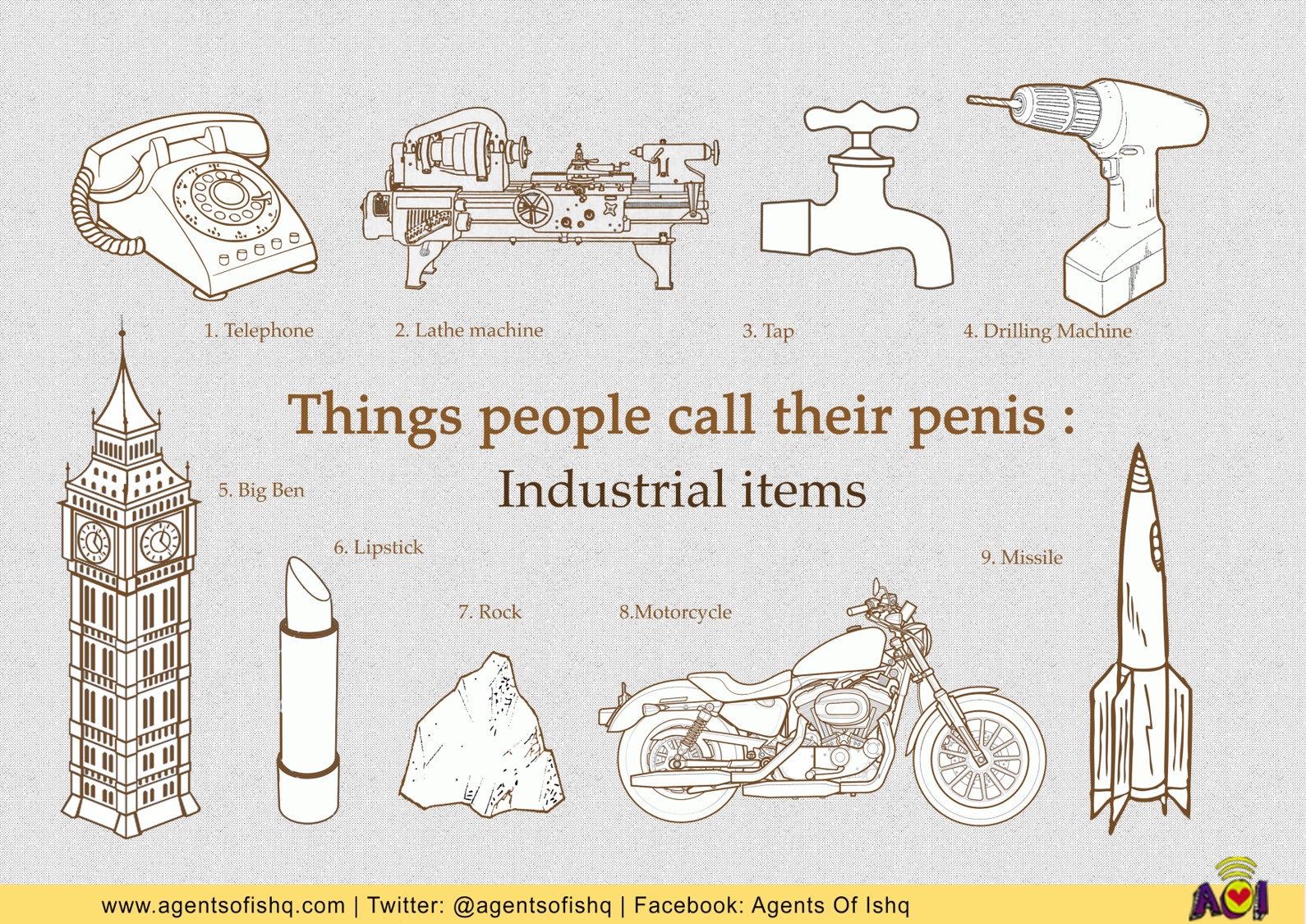 6% had imaginative, funny, irreverent terms. Or named their penises after notable public figures. 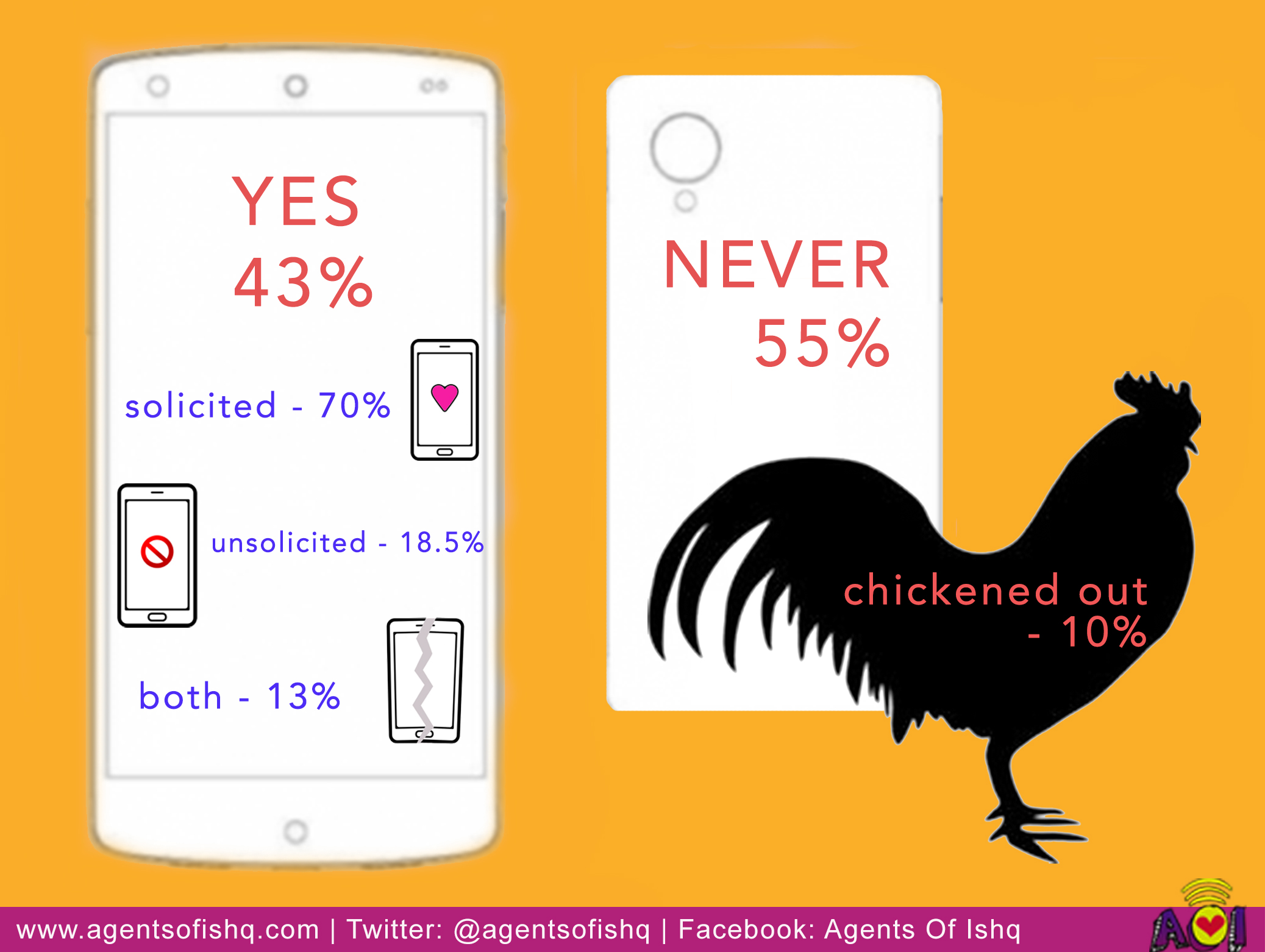 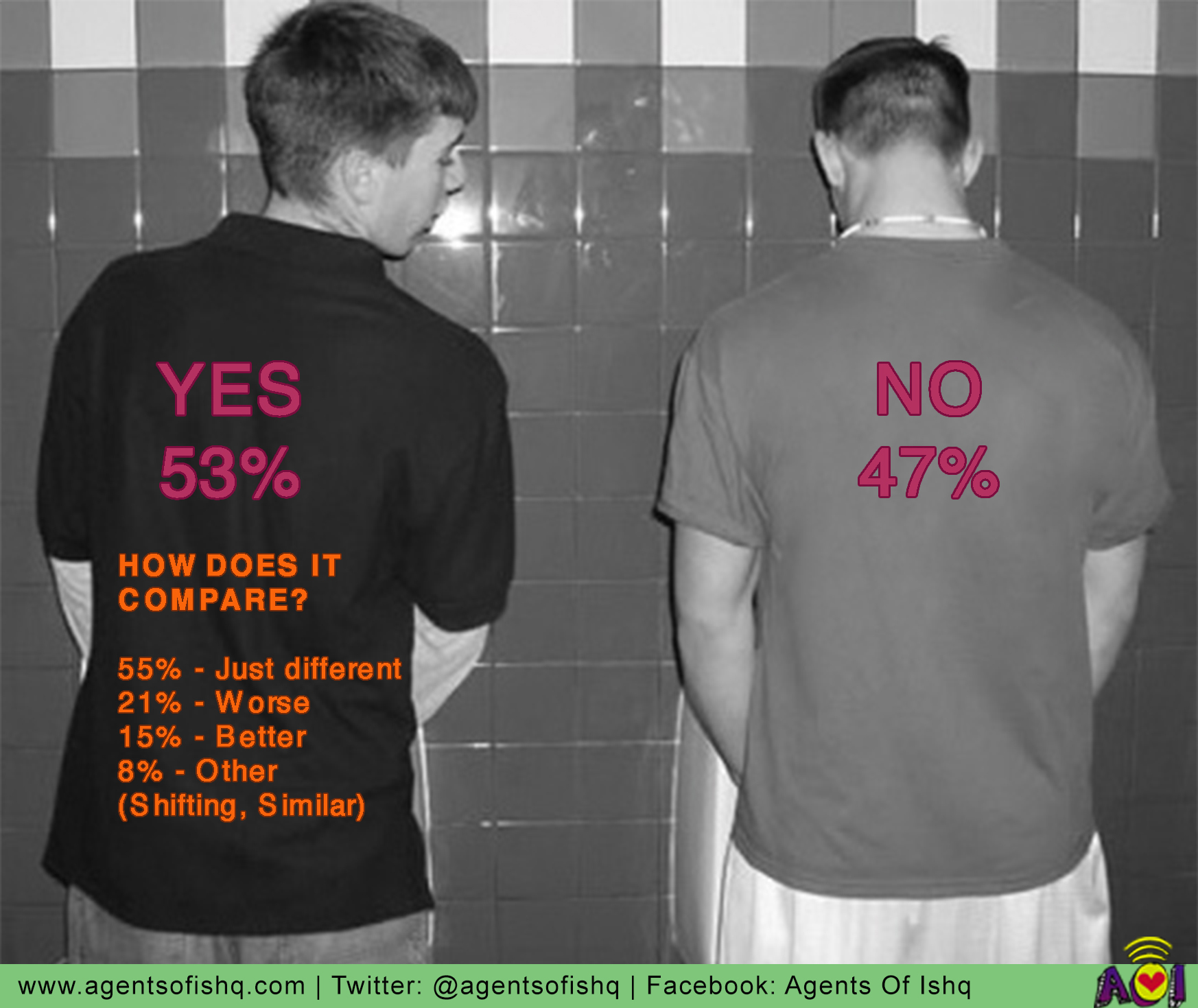 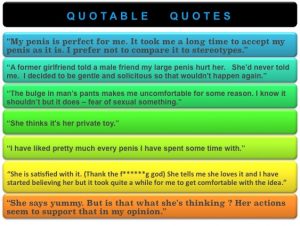 1 thought on “(English) WHAT INDIAN MEN FEEL ABOUT THEIR PENIS”