Watch Me As I Fall In Love: 5 Trans Persons Talk About Dating - Agents of Ishq
Menu 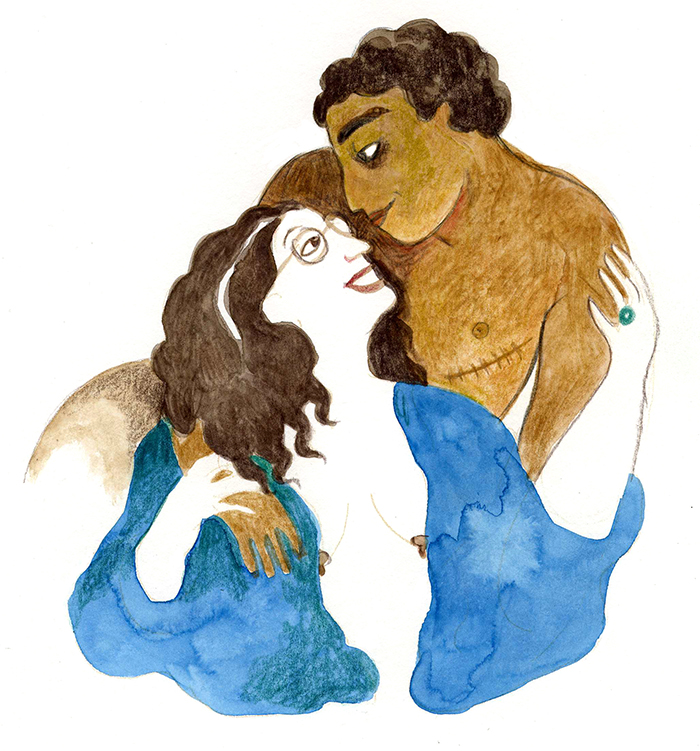 I was scared that I’d fall in love with him, and he wouldn’t actually be open to dating a transwoman.

Some years ago, when I was 21 and not yet in love, I would spend hours trying to take selfies for my Tinder profile. I was desperate to look like a woman. I wanted to look like who I felt.

It’s when I started experimenting with bindis — big round red ones that matched my lipstick — with fake silver jhumkas. I’d take the photo from the top, my chin out and slanted at an angle that ensured you couldn’t see my whole face.

My second Tinder date was with a boy who finished his beer so quickly that he started drinking mine. I’d just moved to Delhi, and met him at his house. Yes, yes, everyone has asked me 20 times why I met a stranger in his house on our first date. I don’t have an answer to that.

He’s the only person I’ve connected with wildly and instantly. He made me laugh madly, and we stayed up talking on his terrace until early in the morning. But we never met or spoke again. I was scared that I’d fall in love with him, and he wouldn’t actually be open to dating a transwoman.

A small part of my fear that night came from how I look. Would he ever consider dating someone who didn’t look as feminine as all his friends? But he never called me either, so that was that. But it took me a while to let it go and say that love is like that only… sometimes yes, sometimes no, half yes, half no.

Back then I’d been torn between trying everything I saw women around me doing, and finding a way to be myself. Today I giggle about male friends who love women in stilettos and bright lipstick. I’d wanted to meet people who’d find me attractive even if I met them in my purane cotton pants and talked non-stop about movies in the same animated way that they talked about things they were interested in.

Abhi, four years later, I’ve met a woman like this. We’ve been together a year. I care less about my appearance with her. She first told me she loved me much before I said it to her. For two months I just liked the power that gave me. I’d heard enough about how I’d never find true love, so maybe this was my safety net.

The day I told my girlfriend I loved her too, we were sitting at a Domino’s Pizza parlour fighting over whether to order a chicken or vegetarian pizza. “I love you and all,” I told her, “but that doesn’t mean you can convince me to order vegetarian!” I usually meet men for coffee, or for a walk down random lanes. If he’s handsome and hot, I don’t talk at all. I’m always trying to ask them about their past relationships and how and why they broke up with their exes, because sometimes men are just not serious about relationships, you know? Plus, I studied psychology in college, so I use all of what I learnt on the guys I meet. You know, body language, how he’s responding, that kind of thing.

In college, I watched my classmates get into relationships. Love was intense, quick and purposeful, the kind that gave you a head rush. Maybe you can call it peer pressure, but I just wanted to know what it was like to be in a relationship.

That’s when I began to use dating apps to meet new people, but nothing much came from them. Once I even went to a “love meet” organised by my friend for people from the LGBT community. We sat in Cubbon Park — everyone from Bangalore has heard countless love stories beginning or ending here. We talked to each other and, at the end of the meeting, wrote down the name of a person in the group we might like to meet again. If that person had written down your name, then you were set. But nothing came of that either.

When I was younger (and more innocent), I believed I was a girl who would grow up, study, fall in love, get married and have a child. Back then I was certain I’d find someone, someone who understood me, who treated me well, who was kind.

Now my mother is worried that I’ll never get married, because transpeople’s love stories are often unsuccessful, and some of this comes from the guilt that we can’t have children. But I’ve realised it’s much harder to talk about marriage so easily, because it’s not easy to find someone who suits you and wants to be with you. Love is supposed to be the simplest thing, but it isn’t.

I’m used to questions about me, but I wouldn’t have liked to hear people say things about her just because she was seeing a transman. She left me 23 missed calls the day after the party. I never called her back.

When I was 19, na, I met a woman at a bookshop in Bombay. She was skimming through Hemmingway, and I was reading Carver. She wrote down my number on her hand — aaj kal yeh sab kaun karta hai? Anyway one day she invited me to a party at her friend’s house. I wasn’t one for parties, but the moment she said she hoped to see me there, mujhe jaana hi tha.

At the party I gifted her two books; you know, because we met at a bookshop. All her friends began to nudge each other the moment I did that. Then one of the men turned to her and muttered something. The woman gave that nosey friend a dirty look and walked away with me. I didn’t ask her what the man said.

That’s when I realised. Love is supposed to be the simplest thing, but it isn’t.

A lot of women I’ve dated have described their ‘ideal’ man to me. Some, much to my surprise, described macho, tattooed men I could never be. Others described skinny, nerdy men who listened more than they spoke. Not that I wanted to be them, but when I transitioned medically, I remained plump, no beard, no broad shoulders. I hated the idea of going to a gym because a lot of men have just laughed at me. So what was I to do?

PEOPLE NEED TO WATCH THEMSELVES

I can’t deal with someone suddenly telling me, ‘Oh I love you, I want to marry you.’

I don’t like the idea of love and relationships. Today I think people just find it fashionable to say they’re in a relationship. There must be one or two people who’ll love you truly. Love has become all about money and sex. There is nothing else.

Usually I talk to men over the phone. Some of them tell me to meet them at a park, or for coffee, and some say they’ll take me for a movie. Instead, I tell them, park, movie, idu yella nanige ishta illa, I don’t like all this. So we meet at a temple. It’s quieter there, calmer, more peaceful, and a good place for conversation. It also means fewer glances and smirking men watching me walk down the road with another man.

Truthfully, I believed that love existed when I was younger. But it was never intense, or consuming and like a need. It only meant that the person you loved would never cheat on you — it meant that they would understand me, what I wanted, who I am. WATCH ME AS I FALL IN LOVE

Ours is a cute love story… I’d told my friend the moment I saw this woman that she would become her bhabi, and now it’s coming true.

The first thing my father asked me when I came out to him as a transman was, “Will you ever have your own family?”

My father only wanted that I find someone who would look after me, and whom I could look after. I just told him I didn’t know. I said instead that I would have a house for sure, and that I’d try to have a family.

His worry made sense, because a woman I’d been seeing in college had told her parents about me. Until then I hadn’t really thought about marriage and family. Her mother called me up furiously, and she asked me why I was ruining her daughter’s life — somehow, this gave me the strength to come out to my parents.

Of course, that seems like another age now. I’m getting married to my girlfriend early next year, and both our families are happy.

Ours is a cute love story. I fell in love with a woman three years older than me. We became friends quickly and easily, and she would tell me every time her parents had set up a meeting for her with a potential husband. I’d tell her to go meet him, but for that hour in which she was away, I’d be extremely worked up. Finally, she was the one who first said she wanted to marry me, but I’ve still always been worried about what people say about her because she’s with a transman.

When I was in hospital for my surgery, she was the only one I allowed in the hospital. She worried about everything during this time — if I made sounds in my sleep she would always ask me if I needed anything. When my hormone shots made me angry as a side effect, she let things be.

My girlfriend is a friend of a friend — I’d told my friend the moment I saw this woman that she would become her bhabi, and now it’s coming true.

Amruta Patil, writer and painter, is the author of the beloved graphic novels Kari (2008), Adi Parva: Churning Of the Ocean (2012) and Sauptik: Blood and Flowers (2016). http://amrutapatil.blogspot.com