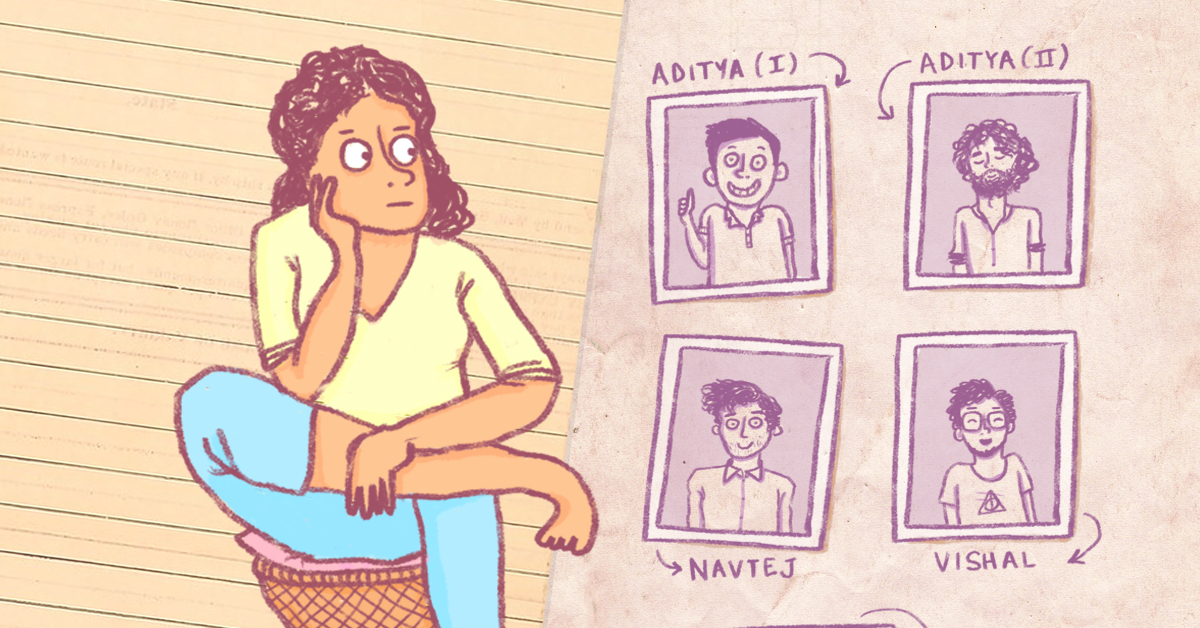 I know Aditya through Instagram. His name is a name I’ve heard only once before, on Kumar uncle’s grandson who studied in Christ (deemed to be) University and now works in Goldman Sachs. Kumar uncle’s grandson is a sweet boy. Whenever we meet for dinner and drinks with our families, he hugs S and me tightly, like we’ve always been friends and will always be friends. During our hug, I imagine Ma looking at us in our moment of intimacy and wondering whether there’s something going on between us. I hold on to him for a moment longer and pretend that there is something between us, that perhaps we’ve been secretly dating. Our families are ‘compatible’ also, it would work out very well. But Kumar uncle’s grandson, Aditya, has a perfect face and an even more perfect body. On his Instagram and WhatsApp pictures, I’ve seen his abs tucked away behind tank tops that are only slightly lifted. They don’t match well with my uncontained body; it never would’ve worked. Kumar uncle’s Aditya and Instagram Aditya are same- same but different. Grandson Aditya once asked me why I’m not dating anyone, to which I replied carelessly, “who has the time, ya?” The shock on his face lent itself to me and I quickly began to calculate how much time I don’t spend thinking about boys. Insta Aditya would never say such things because Insta Aditya is more my type. P set us up over Instagram and said that we would be perfect for each other. His curly-curly hair falls over his light eyes and even lighter skin. His beard is dark and very thick, and when he writes poems, he narrates them with an all-knowing smile (not a full smile but a half smile).

I mean, I’m not fully sure of this — but this is what Instagram tells me, so I’m sure that this is what he wants me to think. I talked to Insta Aditya on Instagram chat for three weeks. We sent each other long walls of text in which we spoke of Ghalib and poetry. One day, he sent me a frustrated sounding message. He had just watched Uri and felt awful. I knew that he was from Jammu so I knew enough not to assume anything about why the film might have made him upset. In his message, he offered me emotions I suddenly felt very scared of. What I took from his message was that he didn’t have a good day and he was telling me now so that I could help him, maybe speak to him, maybe learn more about him. The beginning of our love story was now, and I didn’t know how to be a part of it.

So I didn’t reply until the next day and by then it was too late to dwell on emotions given to us by films.

When he stopped replying to me eventually, I waited for the very familiar feeling of rejection. I looked at the stories he uploaded after having seen my message already, and waited for my mind to give me excuses (he must be busy, he must be thinking of a reply, he must be upset), but some part of me had deemed this interaction unworthy and when I told P that he had stopped texting, her look of sorry sadness fell flat and everything just felt okay.

He texted me often. Hinge was glitchy so I missed his messages every morning, and when I found his chat in the evenings, he always asked about my day or told me about his. His classes were hectic and he had to travel very often. Once he asked me what I was reading and when I said that I was reading Yashpal’s Jhootha Sach, he replied very quickly, “you should meet my father, he will love you.” I giggled a little bit and felt the beginnings of a phantom feeling. When we met in Champa Gali some weeks after talking, in the corner of a small coffee shop, he spoke and spoke. He smiled often and when I asked him questions that showed that I cared, he looked down and blushed. I wondered if he was charming — in a neatly ironed shirt and formal pants. He hugged me tight before saying goodbye and said that we must meet again soon, and this time it will be in his favourite chai point. I knew this was romantic but kept waiting to feel it.

In the selfies he sent me later, post-workout and pre-dinner, I recognized the beginnings of what would, ideally, become a relationship. The last time we spoke, it was weeks after I had ignored him already. He asked me what I was up to, and when I told him I was busy with my master’s (in English) thesis, he offered to help even though he was already busy with his own MBA. His message was short, “arrey, my literature is lit.” (giggles?)

But I forgot to reply and we haven’t spoken since. Months later, in a drunken confession, I told C about the Navtej I once ghosted by mistake. She laughed, like she usually does and I remembered something he had once told me, so I asked her, “you know, Navtej knows you? You matched with him on Tinder, but you never replied.”

C didn’t remember him, but she did remember Vishal who she had lots of conversations with. She met Vishal in one of her serial dating phases. C tells me that Vishal was sweet and kind. I wouldn’t know either way because Vishal and I only sexted using Harry Potter euphemisms and I knew nothing else about him. Our conversations were nothing and everything all at once, and the first time he said something about things slytherin(g) somewhere, I laughed at him and myself before trying to think of something sexy about Gryffindor. We spoke every morning and evening; the mornings bringing anticipation and the evenings bringing research (what does accio do again? spoiler alert: it makes you come).

Was our conversation the beginning of the perfect love story? That in which we spoke only through Harry Potter and then found love in our boring, real life language? I will never know because Vishal never stopped speaking through Harry Potter. So one day I forgot to reply to him also and Hinge hid his chat after twenty one days.

C stopped speaking to him after I told her about our magical time; it was too loony, she said.

Prateek found me in school one day. I was in 7th standard, living in the glow of my newly purchased Sony Ericsson. Pulling me to the side, he whispered, “I have an idea for a prank.” By the end of the day, I had his best friend’s number lounging on the last page of my biology notebook and a promise to prank Siddhant for two months, till his birthday.

I initiated conversation with Siddhant as his secret crush, a girl who was too scared to be honest about her feelings (no no, I wasn’t being myself). He remained distant at first, but I was persistent. Prateek and I met alone in school every day to discuss our progress, and sometimes we talked on the phone. Siddhant had to be tricked. He gave in soon enough, and I remember days on which I itched to reach home, glaring impatiently at my mother who always stopped at Nilgiris on the way home. When I would finally get to my phone, there would be two messages from him: one telling me about his day, the other asking me about mine. In this way, we spoke and spoke.

When his birthday came, Prateek and I told him that his secret crush was me. I don’t recall a reaction, but years later, when we shifted to Facebook and keeping his attention had become an impossibility, my attention also began to drift. He began speaking to Ananya. Ananya Shetty who was Mitali’s best friend; Ananya Shetty who sang so so well; Ananya Shetty who had long hair and long long legs. During lunch, Siddhant stopped sitting with us and began to sit with Ananya and her friends. In the Facebook Wall posts they both shared, I saw why he spoke to her, her perfect vocabulary and her perfect punctuation was enough to give me also pause. In a vacuum of longing, I wanted nothing more than to be her — to sing like her, to laugh like her, to speak like her. So when Mitali and I got close over Maths tuition, I asked her about Ananya. Mitali loved Ananya too, so when she spoke of her, her smile stretched over painful-looking braces and she gushed, “we met last weekend to discuss the Lost Hero. I’m obsessed with Jason, but she likes Leo, how can anyone not love Jason?” When I read Percy Jackson, I found that I loved Leo too but I couldn’t bring myself to disagree about Jason.

Mitali and I met every day in tuition and spent hours going over trigonometry and triangles. Her frustration with numbers and their attached x’s and y’s leaked into my mood also and I did all I could to cheer her up. Most days, I forgot to ask her about Ananya, and whenever she mentioned her, I felt the very familiar bite of jealousy. But by now I had also forgotten the Siddhant who shared my father’s name and remembered only Mitali; Mitali who was a friend, Mitali who texted me often, Mitali who I didn’t know I was in love with until much much later.

She stopped talking to me after we finished board exams. I remained painfully aware of the silence of my phone until I asked her over Facebook, if something was wrong. She said no until the word lost meaning so I blocked her from everywhere and deleted her number in uncharacteristic bravado. The months of pining and anguish are now just a faint memory, so I can say with a puffed-up smile, “Mitali, who Mitali?”

Ma says that I am unhappy. She is sure of this because the last time I told her that a boy was cute was years ago while we sat in a Coffee Day and the waiter and I exchanged smiles. When I said he was oh so cute oh so wow, Ma looked at me with disgust, “how can you find him cute?”

Sometimes, she asks me if I like someone. I think for a moment, sifting through my small, but handy collection of beards. I imagine lives in which I replied to these boys immediately, on time. I imagine knowing how to flirt and being able to see their charm.

If I’m in a good mood, I feel like apologising for wasting their time. But all these thoughts are fleeting. It doesn’t matter that Ma doesn’t know that I am actually very happy because every time N plays a video of k-pop artist Hwasa, my heart beats in lub-dub-lub-dub a little faster and I can tell you for certain that she is so-charming-very-charming; especially when she looks at me through the screen of my phone — in knowing smirk and green hair, and sings the lyrics of her song in rather apt imitation of Danish Sait saying, ‘ah thoo’.

All names have been changed.

Veronica Oberoi is a teacher who leads a double life. In one, she has regular conversations in which she laughs at everyone including herself. In the other one, she does the same but reads way more queer fanfiction.