Of Simps, Sluts and Societal Pressure - My Time in a 'Boys Club' - Agents of Ishq
Menu 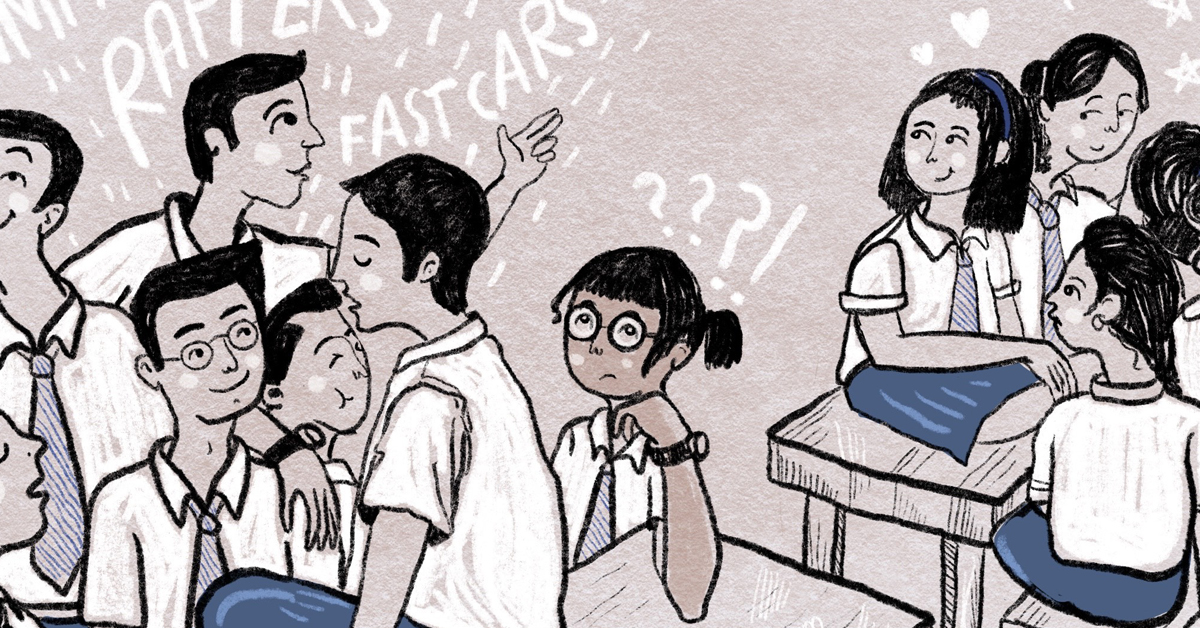 I spent the two worst years of my life in a “boys club”. While correlation doesn’t equal causation, which is to say that the boys club wasn’t necessarily the reason my life sucked, it seemed to symbolise all that sucked about it.

I had a hard time making friends throughout my school-life. My parents and teachers said I shouldn’t be so picky and I’d be lucky if people decided to accept me. It made me feel like I was a bad person who didn’t deserve friends. This belief primed me for the conditioning, manipulation and internalized hate that I was about to be a part of.

Since I couldn’t crack any of the all-girls social circles in high school, I asked my desk partner if I could sit with his group for lunch. He shrugged and said it was okay. He didn’t check with any of his friends, didn’t make a big deal about me being the only girl, and made me feel like I fit in, for the first time, just because they accepted, or should I say, tolerated me.

I knew nothing about rappers or fast cars or cricket but it didn’t matter. I was just happy to be included because it was a feeling I had never felt in the past 14 years. The boys were also fascinated that I was not a “girly girl” (whatever that meant), and they praised me for it. I got a kick out of their saying “she’s a tomboy, woh doosre ladkiyon ke jaise nahi hai”. I then associated all things girly with lameness or weakness. I rolled my eyes at those who left their long tresses open and wore Forever21 clothes. I gagged at girls who loved romantic comedies because, to quote Kartik Aaryan from Pyaar ka Punchnama, “saari ladkiya ek jaise hi hoti hai, bro”. And I did not want to be “saari ladkiyan”. I remember going out for dinner with this group, and one of the boys didn’t really want me to come. My friend then said “chill, she’s not like other girls. She’s a cool girl, no?” he turned, asking me the last part, smiling warmly. I blushed in happiness and modesty regardless of the cringe factor of this sentence. I thought he meant I was cool for being myself, but I didn’t see that he and the other boys thought I was ‘cool’ because I was different from the ‘girly girls’ in our school. There was an implicit binary here – as a girl, if you were not a ‘girly girl’ you were immediately classified as someone who is ‘like a boy’, so you were respected by the boys. That basically meant ‘feminine’ equaled being walked all over (and objectified) and ‘masculine’ meant worthy of respect. The question of why this equation existed arose in my mind. Who decided who was worthy of respect and who wasn’t? What did that say about ‘respect’ and who deserved it?

The boys in my group spent a sizable chunk of lunch break making sexual jokes or objectifying and commenting on other girls’ appearances. And their standards were HARSH. I remember them drooling over a girl who they thought was an absolute goddess just because she looked Caucasian (white skin, light brown hair, and hazel eyes) and was extremely underweight. Their language was full of words like “simp” and “slut”. Simp is a derogatory word used mainly for men who fawn over women and/or are submissive to women. Oh, the irony.

I didn’t know how to process the locker room talk happening in front of me because of how conscious it made me about my own looks – I was by no means skinny, I had dark brown skin, frizzy hair, and thick-rimmed glasses. I began wondering how I would rank on their system of judgement. Thoughts like “I have a nice ass, maybe I’m a 6 if I’m lucky,” or “my skin is too tan today, would they even want me there?” were running through my mind. I knew in the back of my mind that their comments were inappropriate but I didn’t want to be a ‘nag’ and I thought their behavior was just them “being boys”. Now I think what’s the definition of being a boy, every time we say boys will be boys?

If this were a movie, they would be good friends who would accept and love me regardless. But in real life, they’d rub salt in my wounds every time. I would get comments like “abey dark chocolate!” and “did you roll in mud today?” when I walked in after PT. I was reminded over and over again that I was undateable, ugly, and would likely die a virgin – both, through objectifying other girls and through constant comments about my skin color. Being a ‘cool tomboy’ had an unwritten rule – I had to grin through their jokes even if I was hurt, or I would lose my status as a ‘cool girl’ and be lumped with the ‘dumb, girly girls’. Their stupid standard became the one I judged myself and other girls on. Consequently, I found myself judging my female peers and even adult women by the same standards. I looked at the women around me and would constantly, compulsively judge and rate their looks while feeling bad about myself. And the one time I said I agreed when these boys commented that a girl was hot, they started calling me a “dyke” and a “fag”!

And OH MY GOD, the Alpha-Male aspiration. It was always “protein-protein-protein” and “quads-forearms-delts”. Statements about how women were “hoes” or “thirsty gold-diggers” made me feel guilty to even be a woman. They’d make the dumbest comments on masturbation too – they thought that No Nut November would transform them into hyper-masculine Greek Gods. Each conversation made me feel guiltier, weaker, sadder, and worse about myself on the whole and yet, I stuck on. While I considered myself a feminist, I don’t think I understood its nuances or thought of patriarchy as a power structure that did more than just oppress women. In hindsight I also see that they were so anxious to be looked at as ‘real men’ in front of their male friends that making such comments made them feel more secure. They probably also felt like their wealth defined them as men (even though they were still in school), which explains why they thought girls would only be attracted to them if they were rich. I didn’t understand that patriarchy condoned a culture that encouraged boys to hypocritically judge and objectify women while making men feel inadequate without money or muscles. Looking back, I’m sure my desire to be included and loved overrode not only my principles but also my instincts of self-preservation.

I’m lucky that things got better and our group evolved into a more courteous one, so as to accommodate future girlfriends. Soon enough, I befriended my alpha-male friend’s girlfriend, Deepti (who didn’t fit any of his “standards” either) and realized his behavior in front of other guys was a facade for him to feel secure. He behaved differently when surrounded by mostly boys because he was so anxious to perform masculine roles. He brought Deepti over to eat lunch with us one day, and everyone was super sweet, kind and respectful of her in a way they never were with me or girls outside the group. It’s interesting to note that he never acted this way with only the boys. In the process, I was also spared from their bullying and could laugh with them instead of being laughed at. Deepti and I found out that we both liked to swim in our free time, and started to go on swim dates together. I would always feel insecure about wearing the skin-tight, sleeveless hip-length swimsuits because I did not like the idea of boys at the pool seeing how (in my words) ‘pear-shaped’ my body was, so I wore knee-length, loose swimsuits. When Deepti got out of the locker room, I saw her in exactly the kind of swimsuit I’d be afraid to wear at a public pool. She was far from thin. In fact, she was more ‘pear-shaped’ than I thought I was, and she nonchalantly, comfortably carried it. She didn’t appear to be hunching her shoulders or sucking her waist in, like I would usually do when I thought I looked fat in my clothes. Inspired by her, I began wearing the tight, backless black swimsuits that I was saving for “when I get thinner”. That was when I saw that no one really seemed to care or notice how fat I was looking. In fact, I liked how it flattered my silhouette. I enjoyed our races to the deep end even more now that my swimsuit streamlined my posture.

We even gossiped about and laughed at the boys in our group. Like me, she also thought that Ashwin was an a-hole, Arhan’s life seemed to only revolve around food and porn, and Dev was a whiny brat. She scoffed at (and looked past) her boyfriend’s machismo and hinted at him having a sweet, funny and charming interior, which was nice to hear after I had worried about how my generation of men would turn out. When I realized this possibility, I paid more attention to the times his soft interior shone through, and noticed that it happened more often than I thought. This opened my mind to the possibility of forming a deeper bond with him. Maybe I could be his ‘girl best friend (yes, the cringe is strong with this one)!’ We did end up forming a more real, deep connection where he made me feel good about myself and we ended up bonding over art and memes. Who would’ve imagined?

When I turned 16, I changed schools. In the new school, I got to know a boy who seemed alpha-male-ish at first glance, but openly cried, watched rom-coms and questioned his conditioning (and is the coolest guy I know). I understood how fluid these things are, and how magical it can be to escape the stereotypes and assumptions about who we can be. I also saw that not all boys are by nature (or aspire to be) alpha-males. In conversations about new concepts we were learning, he was interested in the history of what is considered abnormal and normal. Sometimes, when talking about something that was sexist I would brace myself for a rant on how feminists are actually ‘misandrists’ (God, how I hate that word) but in fact that never happened and we had some really stimulating conversations! Around the same time, I watched a few videos on the “not like other girls” phenomenon and realized it was happening to me. The pieces were falling into place.

He struck me as laid-back yet very absorbed in conversation and extroverted but not overwhelmingly so. He radiated a subtle strength – not as in-your-face as my old friends but present enough to let you know he was secure and powerful enough in his space to not encroach upon others’ boundaries. I saw that it’s possible to wear your feelings on your sleeve and make people laugh while liking stereotypically ‘male’ things like soccer and sports cars. I finally understood what it meant to be secure in my femininity and well, in my own self, and I am still exploring it by forming stronger female friendships and practicing complimenting my fellow women rather than bringing them down. Now after a year of practicing this, I finally feel more like my real self.

Nayana is a 16 year old IB student who loves to draw and write. She is a self-confessed daydreamer and Highly Sensitive Person, and a sucker for all things whimsical and fantastical. You can find her podcast – Project High School – on Spotify and Podbean.