My Body, My Confusion - Agents of Ishq
Menu 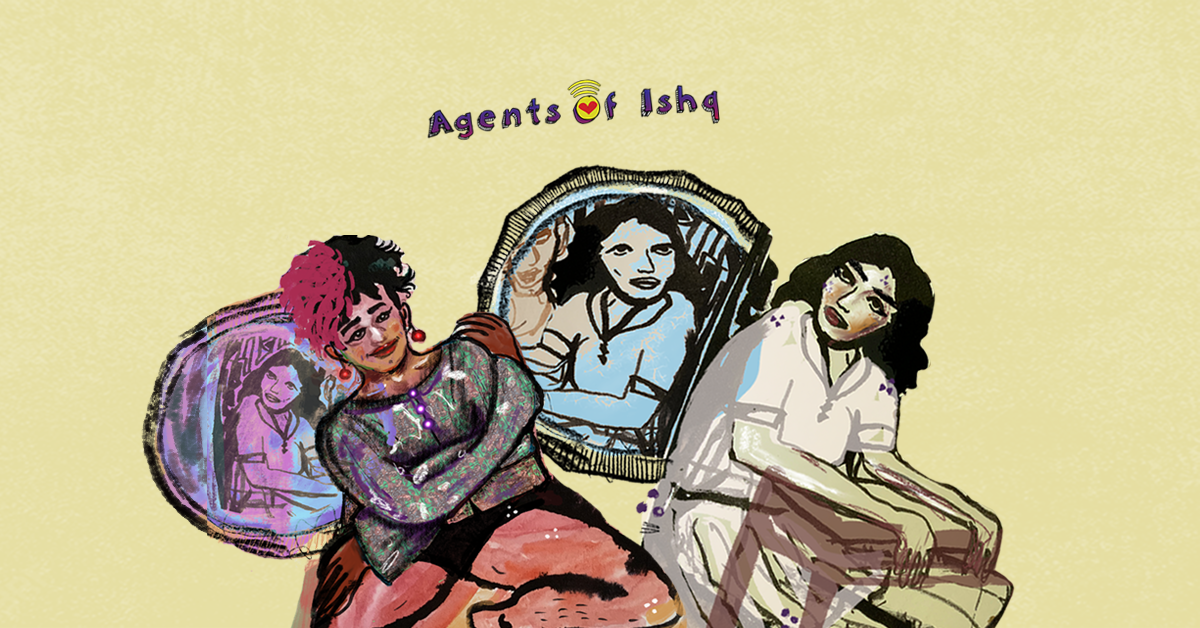 Looking in the mirror was always challenging. When I was younger, the culprit of this shame was the fat hugging my bones tight and refusing to let go. I was not big in the way that doctors looked at me as an anomaly, neither was I told that I am obese and a waste of resources. But I was fat enough to be treated differently. Stores my thin friends shopped at did not have my size and I was never awarded the bonding experience of sharing clothing with my girlfriends when I had nothing to wear. My friends found themselves assuring me repeatedly that I was not ‘that fat’ which they said with such conviction that even they believed it for a moment. Every year I gained more weight than the last and every year my mother would pray that I returned to the weight I was the previous year. My mother was willing to try anything. She sent me to aerobics, Zumba, cycling in the morning and asked my cousins to chase me around so I’d be forced to run. My grandmothers would empty their stash of junk food when I arrived in the summer and secretly feed my parents sweets while I slept. I don’t recall ever being the weight my mother wishes I was, apart from the two times I was seriously ill. In fact, she still recalls with fond nostalgia the moment I was bed ridden for seven days and woke up looking fabulous.

I am constantly attempting to escape my weight. I invest in large jackets that cover my mid-riff. I avoid skin hugging t-shirts like the plague and if anyone invites me to the pool, I create an illness. On my best days I tell myself that people can say what they want about me but no one can deny that I have a great face. I spent years investing in skills that would remain unaffected by my body. Maybe I can’t wear a crop top but distract yourself and feast on my eyeliner which remains mostly perfect. I roll my eyes at fatphobia only to go back home and skip dinner so I’d wake up with a flat stomach. 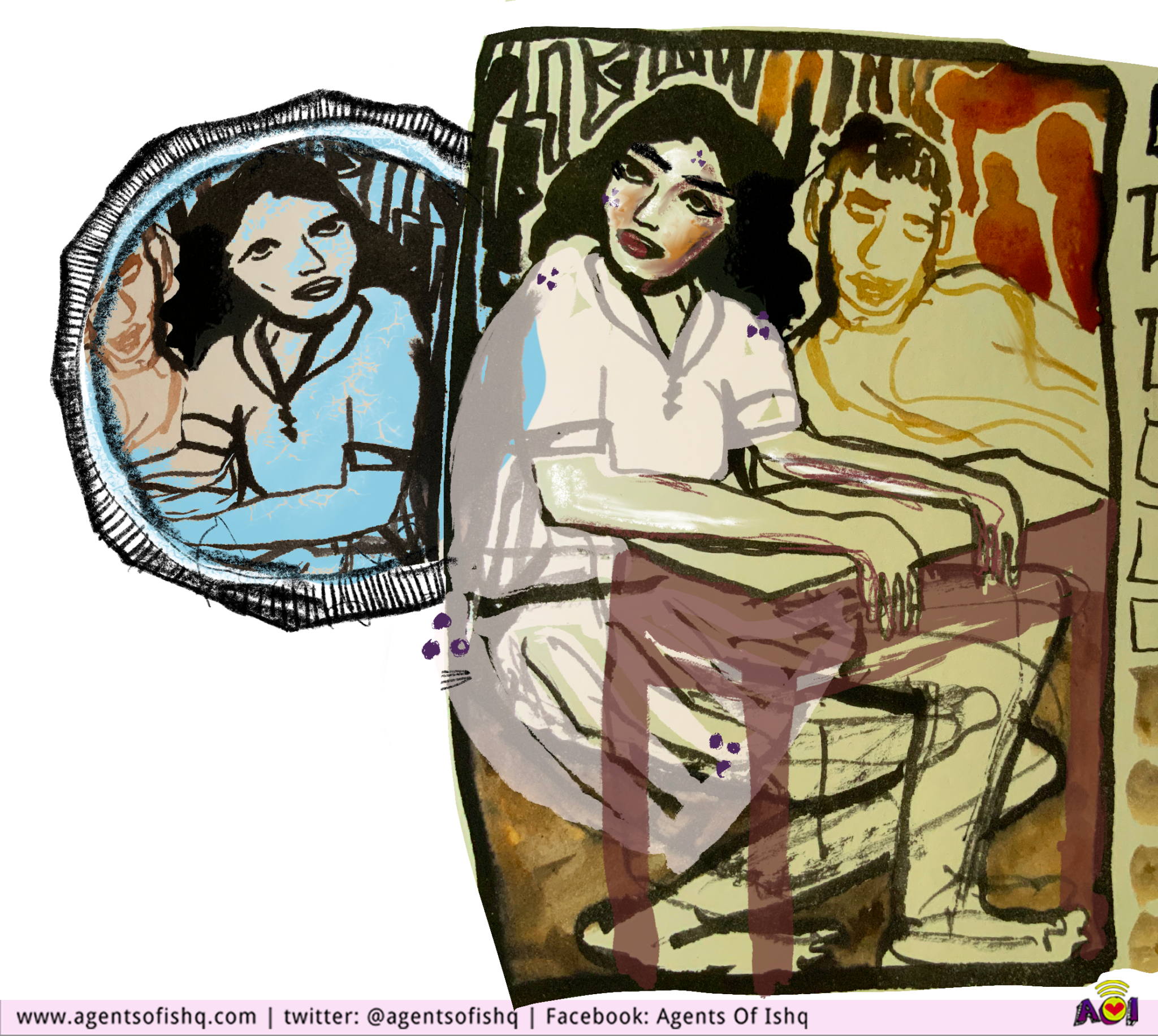 While my weight continues to be a challenging journey, something else made me look away as I got older. I avoided my reflection in passing mirrors and only looked briefly at myself by compulsion. It was a dissociation stronger than anything I had felt before. I didn’t feel like the person that was staring back at me. I was questioning my femininity while attempting to master it. I wanted to and still want to be a woman more than anything but, in my heart, I knew something was changing and I tried everything I could to not give it power. Naming the problem makes it real and denying it is hard work but much easier than realizing that you are not who you want to be.

My femininity demanded endless validation. I had to be a woman at every moment. At 16 I forced myself to cross my legs at all times. My thighs would ache as I spent hours forcing them together in classrooms. School desks were my greatest enemy. They’d push down on my thighs leaving bright red marks and most times wouldn’t even let me cross my legs. While most searched for the beginnings of a childhood romance under school desks I was instilling in myself womanhood. The act I was performing was conscious and demanded much research. I knew that I couldn’t be the role models others had picked out for themselves. I knew I could not be Rachel, Monica or even Phoebe. I settled for people who looked like me and still retained the right to their femininity. I held on to Adele and Queen Latifah, looking at them to do the work I did not have the courage to do.

My idea of the feminine was intrinsic to the experience of heterosexuality. My idea of a woman was heteronormative. In order to be a woman, being a heterosexual was the first step. Being a girl was then synonymous with the approval of men. I didn’t have a lot to choose from or rather I had no choice. Boys that settled for me, I forced myself to fall in love with. The strongest moments of my femininity were in the arms of these men. Not so much when I was with them but when we were being watched, when we’d kiss and I’d hear girls giggling around me and in the moments after when I’d run to the girls for an analysis on what I did when I was alone with him. In that very moment, I was a girl looking at other girls and we were bonding over being girls.

Moments such as these were rewarding but occurred rarely. My façade was met with rejection and humiliation more than success and I would be brought back to my reality with a blow. A boy who once told me he liked me, made it a point to scream that I was a fat elephant and that he could not imagine how he could like me when we were no longer together. I held the hand of a boy who told me I was pretty but would simultaneously insist that I work out at least once a day. I was subjected to hateful comments for no other reason than being big. It hurt more when men who I so wanted to be desired by hurt me but they gave me exactly what I was used to. They loved me the same way my mother did. They loved the thin woman inside me or the thin woman I could be. In my desperation to get male validation I forgot to ask myself if I even liked men. The answer is yes but only rarely and in fleeting moments. I realized that my heterosexuality was an act.

Identifying as queer was a brief moment of relief. I had always known that I was not straight and oscillated somewhere between bisexual and pan depending on the day. Leaning into my sapphic side brought assuring waves of liberation.  Desirability for a queer person was far easier than in the world of heteronormativity. I could hide behind a risky haircut or a FabIndia shirt and could be the embodiment of queerness just like that.

I felt, here was a space that I belonged in without question and without modification. I was feminine because I identified as feminine. This world, my world, did not need me to be someone else. Yet, I could not help doubting myself all the time, wondering did I take the easy way out? In my harshest moments of gender dysphoria, I wonder if I am genderqueer because it is easier to be a fat person than it is to be a fat woman. I wonder if this too is a performance. But if it is after all a performance, why would I choose one of the hardest things to be? Is my need for belonging so intense that I am willing to take oppression over it? I can’t say I don’t feel masculine but I also can’t say I don’t want to be a woman. I can’t say anything because I am so rarely sure. There are days I feel perfectly man, woman and everything in between and there are harder days when I just feel horrible. How must I decipher which amongst these is my truest self?

I long for an identity that is not shaped by the internet. One that is not defined in absolutes. I wish for individuality away from the parts of the world that needs to categorize me so desperately. Throughout this journey I have realized that there is no quick fix to figuring out who you are. Emotions and feelings will arrive and change and guilt is only a hindrance to this fulfilling journey. I ride each wave of confusion as best as I can and shamelessly move on to the next. I am learning or rather trying to learn to look at myself through a lens of my own rather than one that has been handed to me.

Aishwarya Sunil spends her days drinking too many coffees and binge watching all the queer content she can. She is hoping to discover who she is through her writing but until then she will introduce herself as a crazy cat lady to all.