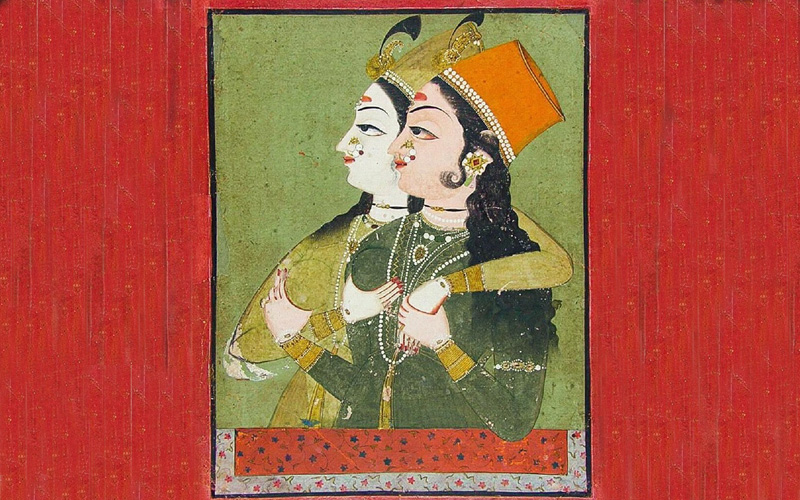 Ever since I started reading Urdu poetry, I had noticed something unusual about ghazals. They often spoke of a beloved, but why was this beloved always genderless? It was something that left me baffled for a long time.

Because Urdu poetry – also known as Rekhta – in the past was written largely by men, and the gender of the lover is not always clear, we tend to assume that the beloved that they celebrated or pined for was a woman. But a closer look at the ghazal shows a fascinating range – some poets, like Mir, wrote about a male beloved too. Within the genre of Rekhti poetry, ghazals use a female voice to speak about the female beloved. And Saraapa, a subgenre of Rekhti, focuses on parts of the body. Studying the work of Urdu ghazal poets showed me that their approach to sexual desire is far more fluid than I had realised.

Although there is a plethora of writing on Urdu poetry, the queer aspects of it aren’t discussed much, even in contemporary writing on the Indian subcontinent. For a long time, I thought that the absence of women, and the lack of representation of multiple sexualities in Urdu poetry was perhaps a function of its Islamic origins – Islam, like Christianity and any other monolithic religion, condemns homosexuality in the strictest of terms. But, as it turns out, I was wrong – really wrong! The ghazal originated in the Arabian peninsula during the 8th century, from where it spread to Persia, leading to the creation of the Persian ghazal. The modern Urdu ghazal is a love-child born out of cultural wedlock to a Persian father and an Indian mother. Its aesthetics are derived from Perso-Arabic Islamicate literature, including the gender of the proverbial ‘maashuq’ (beloved), which, in most cases, is grammatically gender neutral and the identity of the beloved could be either male or female. This is largely because of the Persian traditions which Urdu poetry inherited, as grammatically, in the Persian language, there is no clear distinction between male and female verbs or pronouns, and gender is impossible to determine from the construction of the sentence. Consider the following couplet by Ghalib:

(It was not my fate to unite with the Beloved;

Yet had I gone on living, I’d have kept up this same waiting)

Now, in this couplet, even though the gender of the Beloved (yar) is grammatically masculine, it’s gender neutral, yar, could mean either a female or a male.

(Ghalib, it’s my belief in the words of Nasikh.

He who vows not on Mir is himself an ignoramus)

Mir defied convention when it came to the representation of gender in his poems, which shaped the modern form of the Urdu ghazal. Mir’s fancying of an ‘attar ka launda’ – the son of a perfumer – and a ‘memar ka ladka’ – son of a mason – is quite evident in his poetry.

(So innocent am I,

I ask for medicine from the same perfumer’s boy

who’s the cause of my disease!)

A close analysis of Mir’s deewan (collection of poetry) reveals that his beloved is explicitly male, and he talks often about his fascination with adolescent boys, who just hit puberty. There are at least 225 such couplets which clearly refer to a male beloved, using terms like ‘ladka’, ‘launda’, ‘tifl’, ‘naunihal’, ‘pisar’.

(I want you, but if not you, just fine is your brother!

I need to love, who the beloved is not the matter)

(Brahmin boys of India take away my heart

Beautiful foreheads, headier with the fragrance of Sandal)

(The story-teller’s lad is a sight beyond compare

As is his and my story, a story beyond compare.)

(The florist has found a new flower –

It is the gardener-boy, who has just flowered.)

(The fireworker’s son has fired my heart so,

I can do nothing, but sit and salivate.) 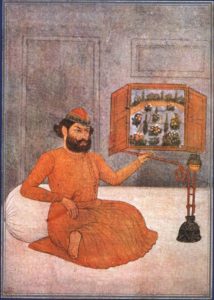 While not all Urdu poets wrote extensively on homosexual themes, there’s no dearth of poets with heterosexual identities who fancied young adolescent boys – though we don’t know if this desire translated into actual relationships. In the following couplet, Ghalib writes:

(With the sprouting of the beard, demand for my beloved has diminished.

Now it appears like the smoke of a dying fire.)

(Today, we might view a relationship between an older man and a young boy far less benevolently but these poems belong to a time of rather different mores.) This tradition of love towards young boys dates back to early Islamic world of Arabia and Persia, where it was a common practice to have a young male lover. Important figures in the history of the ghazal, like the 8th century Persian poet Abu Nuwas and the 14th century Arab poet Nawaji Bin Hasan, also known as “Shams al-Din” or Sun Of Religion, wrote extensively on male homoerotic themes, where the beloved is a young boy who recently attained puberty.

Homosexual love has always been a part of the ghazal’s history. But in India, it wasn’t until the late 19th century, when British Victorian mindsets around sexuality began to take root, that homosexual themes began to disappear from the Urdu ghazal. Barring the 20th century poets Firaaq Gorakhpuri (1896-1982) and Josh Malihabadi (1894-1982), whose homosexual relationships in their poetry and in their personal lives were widely known, there are hardly any examples from the recent past.

However, although they are the most quoted and well-known, men who desire other men or boys don’t form the only kind of queer voice in the Urdu ghazal.

Ghazals and the female voice

Urdu poetry has been the provenance of men, where the narrator and the beloved are referred to in a grammatically masculine gender. While this patriarchal convention creates a space for male homoeroticism, it completely negates and shuts the door on the idea of any female homoeroticism. The absence of female authorship in pre-modern Urdu poetry is a function of the Purdah system, which not only excluded women from the public sphere, but also from literature and the expression of ideas – homoerotic or otherwise.

Enter Rekhti – an interesting genre of Urdu poetry which was developed in early 19th century Lucknow to counter the male “Rekhta” which was dominated by a male narrator and beloved. Rekhti is written in an exaggerated feminine voice by a male poet, highlighting social issues pertaining to women. In Rekhti, terms like ‘du-gana’, ‘ya-gana’, ‘zanakhi’, ‘begana’, ‘shakhi’, ‘ilachi’, ‘wari’, and ‘pyari’ loosely denote the female beloved. The term “Rekhti” was coined by Saadat Yaar Khan “Rangin” (1757-1835), noted for his sensitivity to gender issues. Rangin was also the first Urdu poet to compile a deewan about women titled “Angekhta” which translates to “The Aroused [Verses]”. The thematic contents of Rangin’s “aroused” verses included adulterous sex between men and women, and sex between women and lustful women.

But perhaps it’s important to remember that men impersonating the female voice didn’t make up for the absence of women. Author and literary critic Susanne Kappeler notes, “The assumption of the female point of view and narrative voice – the assumption of linguistic and narrative female ‘subjectivity’ – in no way lessens […] the fundamental elision of the woman as subject. On the contrary, it goes one step further in the total objectification of women.”

As a genre, Rekhti is not exclusively homosexual – in fact, a common theme in Rekhti is the day-to-day conversations among courtesans in playful and naughty idioms. Rangin’s poetry, however, focussed more on sexual themes. Here’s a couplet that talks about a “taboo” topic, menstruation:

(Rangin I swear to you I have my period

Queer relationships and same-sex love are prohibited in Islam, but Rekhti poetry seems not to take heed, as seen in these lines by Rangin:

(My [female] lover and I are not scattered like [the] Urdu,

Our two lives are one; you [female] taunt us for nothing.)

It hurts and pains, I fear for my womb.)

(Where is the pleasure in men,

compared to pleasure, du-guna, in Chapti.) (When she came to take fire, an attraction took hold;

The neighbor lady lit a fire in my heart

If you don’t mind, may I seize a handful or two?

Young lady, greens grow in every bed of yours!)

Jan Sahib (1810-1886)  wrote about sexual fantasies – not necessarily homo-erotic – with a playfull naughtiness:

(He has sucked my tongue many a time, this lallu

bhaar do do joru’on ka aur kamar me kham nahin.

(You are certainly a Zaal, if not in fact a Rustam!

You serve two wives, but your back isn’t bent.)

Another subgenre of Rekhti called ‘Saraapa’, which literally means ‘head to toe’, is one in which the poet writes about various parts of the body.

And then to make you sit and watch that pleasure-taking.)

Or, this couplet where he talks about buttocks and thighs: Here’s another example, and this is perhaps the most poetic description of a vagina I have ever read:

(What other praise can I lavish upon it

Two crescent moons were seen at one place – God be praised!)

It’s only when you uncover these poetic gems that you realise what colonial occupation has done to suppress our literary heritage. These queer genres within Urdu poetry deserve a wider audience. Love – homosexual or otherwise, knows no bounds. Love is like that Greek quote – “What you didn’t do to bury me/But you forgot that I was a seed” – by the 20th century poet Dinos Christianopoulos, who was denounced by the literary community because of his (homo)sexual orientation. Sometimes, I like to think of love as a wildland fire on an empty landscape. A fire within fire, a hope within hope. It defies the topology of the region, the way poetry defies religious and social norms.

Salik heads the Social Media Communications (aka Ghalib-in-Chief) at Talk Journalism and he can be found tweeting about Poetry, Physics and Ghalib @baawraman