I am Big and Beautiful - Agents of Ishq
Menu I was 16 years old when a senior boy dumped my ass because I was overweight. The pursuit of slenderness has been a major life goal for me since then (and for a lot of other women, known and unknown), constantly worrying if I can strike the right balance between calories I eat and calories I burn. No one told me such victories are unnecessary. However, it has been particularly difficult and draining for me to be my own sexually demanding unapologetic self because I felt like I carry a lot of baggage as a big, fat woman and was undeserving of any kind of sexual autonomy- fat bodies like mine are unwanted and unloved. It’s always been a struggle because I feel like men who sleep with me do it either because I’m a fetish or out of pity and I don’t know which is worse. I am saying ‘men’ very consciously, mind you, as more often than not in my experience, they are the ones pushing me to approximate idealized images of thinness and beauty. 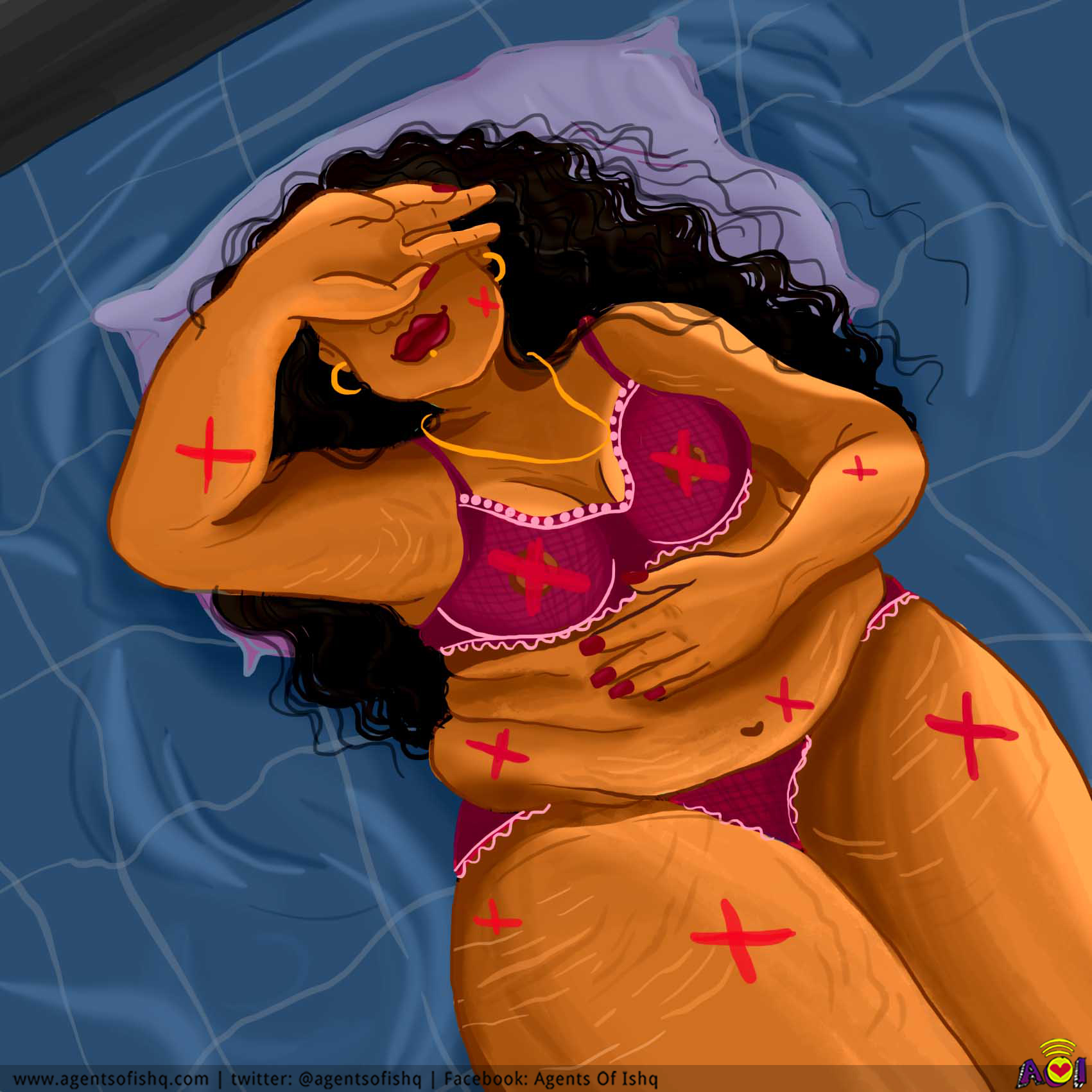 I dated men almost throughout my teenage/adolescence days. That was before I realized and accepted the fact that I am bisexual. Many of those men never failed to make me feel miserable about my body. They would respond to the flab on my stomach or the stretch marks on my ass with an unnerving passive-aggression that made me feel like I should apologize first, for being big. I remember back in college I was seeing this guy who would always laugh it off when I expressed my desire to be on top. It passes off as funny because no one in their right mind would believe that a fat person can be fat and sexually controlling simultaneously. So it was always good ol’ missionary and even then he would never look at or hold me because it was too much to ask for a person my size. Orgasms were replaced with backhanded compliments “Black lingerie might make you look thinner” and really strenuous sexual relationships “Your bulging tummy distracts me and makes it a little difficult for me to finish”; loving and supportive partners were replaced with judgmental voyeurs examining my body in what would always become a powerful confirmation that it was men who got to decide and judge what desirability is, rather than just act on their own desires like any other person. During this time, the overwhelming need to raise myself to the needs of men while completely overlooking my own, and constantly faking it till making it became an easier way out. Of course it has taken a lot for a poor man to put their manhood inside a fat body (who was forcing them?) and they must be rewarded even if it meant no orgasm for me. Never did I ever, throughout these years realize the sexual pleasures my body was actually capable of, because it felt like a massive sexual constraint at that time. All this felt like – that’s just the way it is.

Dating women, changed a lot of things for me. I used to find it impossible to pick apart toxic sexual dynamics until I started dating women. Don’t get me wrong, I am in NO WAY saying that women exist solely to undo the collective male anxiety and violence towards big bodies. I am not even making the ironical suggestion that the only viable way to circumvent the rather antiquated and oppressive understandings of heterosexuality and gender is other sexualities.

All I am saying is that I’ve experienced that women do not consciously sexually dehumanize me for simply existing the way I do, for living in a larger body. The first time I stripped naked in front of a woman I wasn’t ashamed of my big buttocks or huge swinging breasts because she didn’t turn away her eyes in disgust. Her hands celebrated my body so endearingly like.. it was soft but powerful and sensually inviting; not something repulsive. Hilarious, right? It’s been almost 4 years since I have accepted my sexuality in all its glory and realized recently that there is never any scope for the weight stigma, glazed in male supremacy, to inhibit my sexual autonomy in the bedroom while making love to a woman. I didn’t sleep with a woman for the longest time (despite wanting to) because my previous relationships convinced me that sexual liberation was redeemable only through the attainment of a smaller body completely offsetting its desirability in the process. There were times when I almost did it with my then girlfriend but I was so body conscious- eventually it always got the better of me, the “Is my body good enough?” Then I slept with a woman for the first time and my body didn’t feel like an anomaly. What are orgasms but the act of letting go, the feeling of liberation in the face of a system that is hellbent on reminding us that we do not belong? She held me and told me my body was beautiful and the way she touched me made me feel that way too. And sometimes that’s all we need to get by. I would like to conclude with a question: Is there any scope of emancipation for everyone under the common banner of womanhood? The term lately doesn’t feel like a unifying call to arms but a convenient erasure of difference. I am bisexual, I am fat and I am a woman-  thrice removed from the milieu of the (sexually) privileged. It’s exhausting how we need to constantly remind ourselves time and again that our bodies should not take over the space of sex, romance, self worth and truth- that the world is something we can collectively build; be an accepted part of and not just endure. Of course, to the vulnerable, words like fat liberation and body positivity are just that-mere words, unless people collectively listen, understand and actively practice the art of keeping patriarchal malaise out of the bedroom and definitely off our round, infinite bodies. And for those with whom I’ve begun this journey finally, with whom I’ve experienced my body as full of sweet spots of pleasure, I sing the body electric.

Aritri Dutta, a keen poetry lover is currently working at an advertising agency based in Mumbai. On weekends she cooks, reads, spends time with her mum and contemplates on the wicked, wicked ways of the world.