Sometimes I think that friendship and hugging are oddly co-related. Both exist in a place of love which is somewhere between sexual love and cordial acquaintance. Sometimes friendships also fluctuate between friend-love and romantic interest, just like hugs can have myriad meanings. But is that such a bad thing? If a friend has feelings for you, is it necessarily a calamity, a shame, a problem?

I didn’t always have a weird relationship with hugging. As a young person, I have enjoyed tight or squishy hugs from family and friends. They made me feel warm all over. I never thought too much about it.

But, over time I have been uncomfortable, terrified and petrified at the idea of having to hug people at gatherings. It started after a few conversations where I heard friends discuss hugs from friends as over-familiar and predatory. I became a little self-conscious and aware of how simple gestures could be misconstrued. It didn’t help that some people to whom I gave warm hugs, as simple human affection, often misunderstood it and became stalkers later.

It made me feel as though the conclusions of my friends were right, that hugs can give rise to thoughts of intimacy and unwanted advances.  I am not one for half-hearted hugs, which I find more uncomfortable than not giving a hug at all, so eventually, in social situations I always chose the latter. The result of this was that before and after any party or gathering, I found ways to make my presence inconspicuous or scurry away without anyone noticing. This went on for long, until recently. About 3 years ago, I met a beautiful young boy named Parikshit at a city film festival we both were volunteering at. We were both in committed relationships at the time but that didn’t stop him from flirting with me. He would unabashedly compliment me on my looks and personality throwing in a filmi dialogue or two. It was fun and felt harmless and flattering. Since he was younger to me by a few years and committed, I didn’t give it much thought. It was amusing and sweet to see how he always managed a break during the time I was out on my mine and pretended like it was a coincidence.

Two days into the festival, he came out to me as a transgender man.  He shared that he had watched a recent episode of Satayamev Jayate about alternate genders and sexualities and finally realised as well as accepted who he was.  Apparently he had seen me on the show and remembered me clearly. While it wasn’t the first time that people had come out to me I found this interesting because I knew of very few transmen who had sensitized their entire families, were out, proud and, well, doe-eyed romantics, which Parikshit absolutely was.

The festival ended. There was no real reason for us to meet. But he would keep sending me flirtatious messages asking to take me out on a date. Not wanting to lead him on I refused and told him of my disinterest. This did not deter him from pursuing a meet-up.

After many No’s I finally agreed to meet him for a coffee, when he told me about his upcoming surgery as part of his transition and the fact that he was a bit anxious about it. On the day of our ‘coffee- date’ he came wearing a very smart black shirt with a great pair of denims. He had also maaroed some bhaari perfume. We sat down and ordered our coffees. He flirted a bit but I managed to steer the conversation to his operation. He shared that it was a complicated one requiring removing his uterus. He said he wished to donate it to a transwoman friend if that were possible. This was the first time I got to know about the different body complications that a sex re-assignment procedure might entail, especially for someone already on hormone therapy. He was a bit nervous but not scared. He felt that he would be closer to the body of his soul. He then steered back the conversation to some flirting. I laughed as I always did. I know some people get annoyed with such persistence and feel it is disrespecting consent, but for me, it was a matter of whether I am comfortable or not. I had never found his flirtation aggressive or threatening. There was something sweethearted and innocent about it. I didn’t think there is anything wrong in him expressing his interest as long as I did not miscommunicate mine. His flirts made me laugh and feel almost affectionate. Yet, I was guarded because I did not want to lead him on in any way.

At the end of the meeting, he decided to walk me to an auto-rickshaw. We had an awkward moment because I sensed he was feeling vulnerable and expected a warm, comforting gesture from a friend. And so, I was in a hurry to get in, to avoid the uncomfortable parting hug that seemed to be hovering in the air! I dithered, then shook his hand, wished him all the best and got into the auto. But as the auto- driver put the auto in gear I felt that maybe I should have hugged him.Perhaps it wouldn’t have been so bad. In that moment I felt like perhaps it was a wrong decision not to hug someone who was feeling vulnerable in order to be absolutely pakka and politically correct. 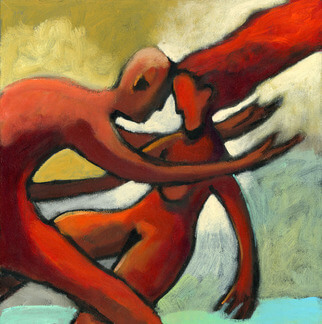 The next day I was travelling to Singapore. As I landed, checked into the hotel and enabled my wi-fi, I saw a message from Parikshit’s partner. She asked me to inform everyone from our work group that Parikshit was no more. He had had passed away on the operation table.

I couldn’t believe it. The crying began and continued for a few hours and sporadically the next few days. Mixed up with the pouring of tears was the thought that I withheld a loving embrace from someone I truly cared about. I wasn’t able to forgive myself. A few days later I shared this feeling of regret at his condolence meeting. My friends there made me understand that we need to forgive ourselves for the situations we are in if we are to truly move on. They all shared happy stories of his flirting and incessant talking about me.

From that day till now I hug people. I hug them a lot. I even hug people who are strangers while leaving gatherings – unless they are uncomfortable.  I have stopped doubting myself of being unable to handle an accusation of an unwanted advance just because of hugging.  Previously I feared that if a friend who has an interest in me is hugged and they continue to pursue the interest, then it would become awkward. I imagined it to become even crueler when they would be rejected outright.  I didn’t want to handle the emotional mess it would entail hence I didn’t allow friends with some form of interest to just gradually settle into simpler friendship.

I wonder if friendship is really that simple and if it can always be devoid of loving feelings and intimate touches? What does the word ‘just friends’ really mean? Can someone who loves us eventually actually become ‘just friends’? Is the fear of managing the mess stopping us from building intimate friendships and making us with-hold our love?

Sometimes I think also that we see all touch as sexual in one way and sexual as a problem in so many ways. Society also acts as if the only intimate relationship outside blood that matters is marriage or romantic relationships. Friendship and its mixed intimate feelings and layers is something we do not discuss much or think seriously about enough. I believe now that hugs are a truly wonderful thing. If there is anything that resembles love in all its human magical form it’s a hug and the biggest punishment you could give someone is to take away touch.  A single hug can provide enormous support when we are low or anxious. It communicates that we love and care. That we think that the person we are hugging is special and we want them to fare well. That we have only their best interests at heart.

And if there is some emotional confusion, that we trust them, ourselves and the idea of loving friendship enough to deal with it as it comes.

Here is hoping you never lack for hugs to give and take.

Shreya is 30 years old and loves swimming, cooking and Facebooking.