How Can You Escape from the Body Image House of Mirrors? - Agents of Ishq
Menu 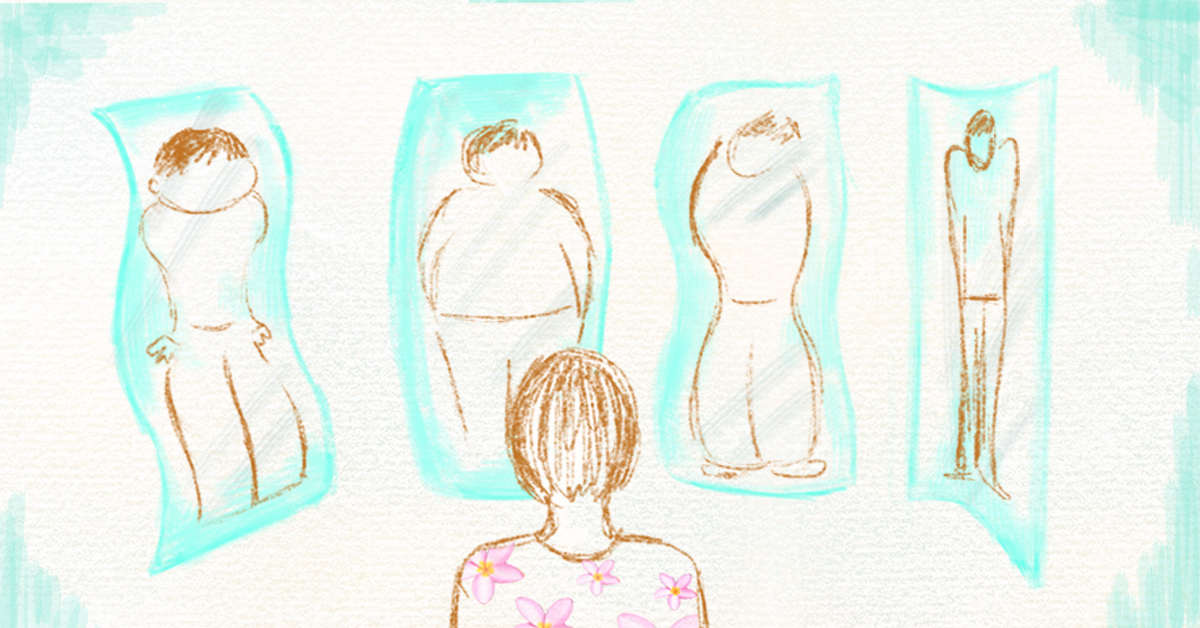 A primer about body image and how we can tackle problems related to it!

What do people usually mean when they say ‘body image’?

Body image refers to the way we feel about our bodies – the way we see our bodies, as well as the way that we think other people see us (even if, in reality, this isn’t how they actually see us). 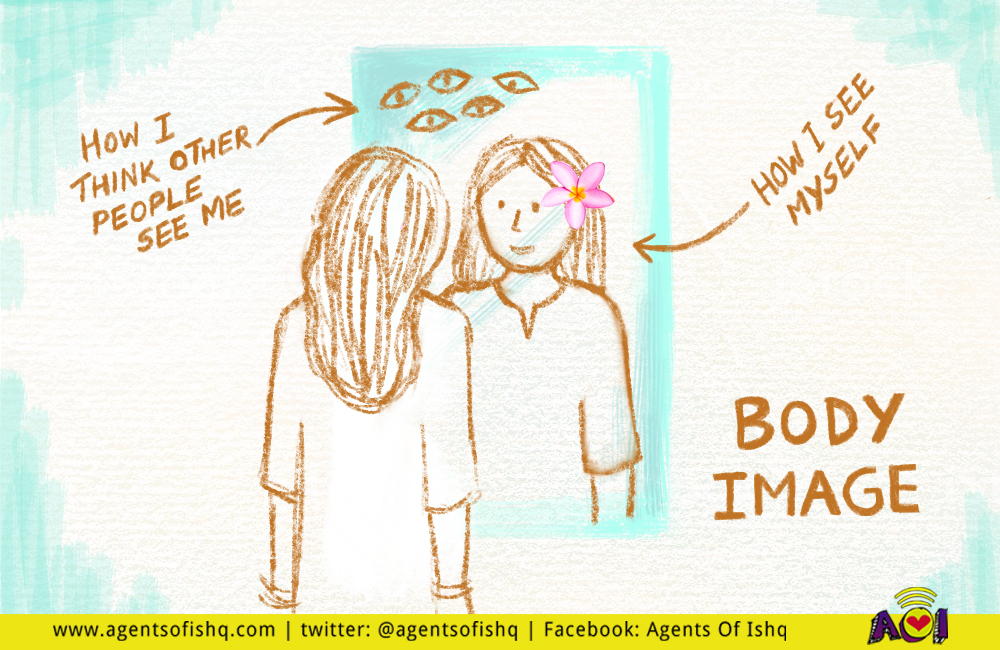 What makes us worry about body image?

All of us experience our bodies differently, and this can sometimes be influenced by factors like pressure from family, social and cultural expectations, or being constantly bombarded with images of “perfect” bodies in the media and pop culture, or pressure from our own selves.

This can affect our lives in many ways: issues with self esteem often go hand-in-hand with body image issues. It can also affect our sexual confidence and our mental sexual health. Are good-looking people immune to such problems?

It might seem like people who are considered attractive by society’s standards have nothing to worry about. But the truth is that body image issues affect everyone – men, women, young people, old people, beautiful people, celebrities and ordinary-looking  folks too. Franz Kafka, the famous Czech writer, once wrote in his personal diary: “I was afraid of mirrors, because they showed an inescapable ugliness.” Singer Michael Jackson, artist Andy Warhol, poet Sylvia Plath and the actor Marilyn Monroe are all thought to have struggled with body image too.

Do all people who don’t fit the conventional idea of beauty have poor body image?

Remember Fat Amy from the movie Pitch Perfect, played by Rebel Wilson? She was confident and happy – and hilarious – just the way she was. Just as many kinds of people can be affected by body image issues, irrespective of how they look, many kinds of people can have confidence in themselves and their bodies, whether or not society thinks they should.

Does gender affect the way we perceive our bodies? Yes – quite a lot! Because society has such strict rules on how women must look and behave, and so much emphasis and scrutiny is placed on women’s appearance right from a very young age, body image tends to affect women in a deeper and more widespread way.

But more and more, researchers are finding that men struggle with body image too, though they might deal with it differently – women internalise this shame more and are more likely to try to change their bodies, while men are less likely to talk about negative body image or seek treatment for problems related to it.

Trans people may also experience a condition known as gender dysphoria, which involves a conflict between the gender they were assigned and the gender they identify with. Not having a body that affirms their gender can be a source of distress.

Is it wrong to try to change how you look?

Not as such – many of us try to do this in some way: dye hair our hair, wear clothes that are slimming, heels to look taller, or braces to fix crooked teeth. Sometimes we change our appearance not because we dislike who we are, but because we want to celebrate aspects of ourselves – colour, and flamboyance, and art, like people have done for ages with tattoos, hair dye, body paint and jewellery, for instance.

Advances in technology make many more kinds of things a possibility too – from the “lip plumpers” that allow you to enhance your lips at home to cosmetic surgeries like nose jobs or breast implants or the increasingly popular butt lifts. You may feel concerned about a close friend or loved one taking drastic measures to alter their appearance. But shaming someone for wanting to do so is not okay – whether they are someone you know or a faraway celebrity.

When is worrying about your body too much worrying? When is it seen as a problem?

Sometimes, insecurities about body image can get the better of us and tip over into something far more serious. Here is a broad list of behaviours that might indicate this:

If your worries about body image interfere with your daily life in any way, then it ought to be considered a problem.

What kind of disorders are linked to body image? These are considered medical illnesses, in which a person suffers from severe distress about the shape of their body or their weight, and has irregular eating habits. The most common kinds are:

What is Body Dysmorphic Disorder?

This is a condition in which a person obsesses over flaws in their appearance – even if these flaws are very small or unnoticeable to other people. The condition can become very severe if not addressed, and is often linked to depression, anxiety, and suicidal thoughts. 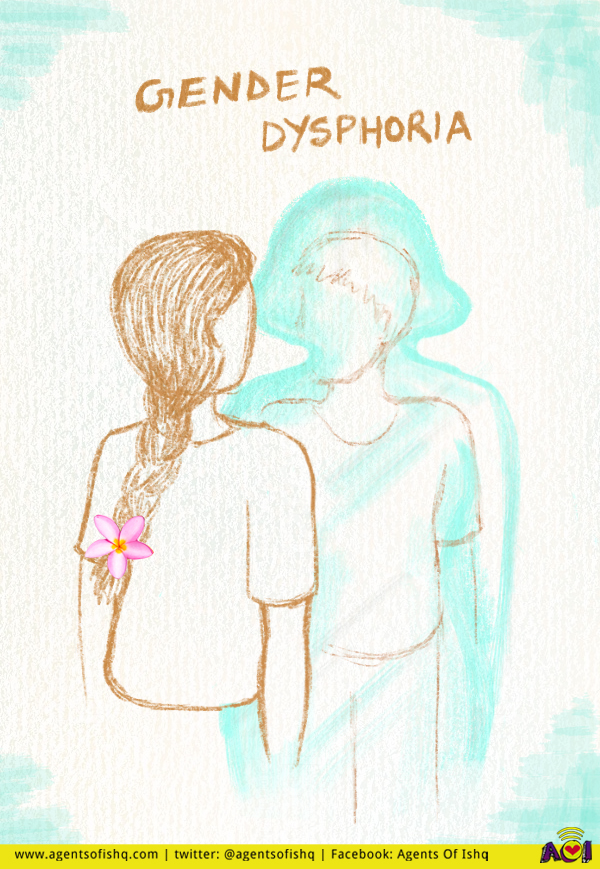 Is body dysmorphia the same as gender dysphoria?

No, though people often confuse the two. Body dysmorphia is an anxiety disorder that causes people to have a distorted perception of how they look. Gender dysphoria, on the other hand, isn’t a problem of perception but a condition in which a person experiences distress because their biological sex and gender identity do not match. And unlike body dysmorphia, it is not a mental illness.

What should you do if you think you have a problem with body image – or know someone else who does? Can it be treated?

One way of combating body image issues, in an everyday way, says Shabari Bhattacharya, a counsellor and trainer at Parivarthan Counselling, Training and Research Centre in Bangalore, is to seek out body positive messages and communities, many of which can be found online. Another is to focus on what your body can do – its strengths and abilities, rather than just on appearance. And if you struggle with food, trying to change the way you look at food might help too – seeing it as a source of nourishment, rather than as something that is enticing or that should be associated with guilt. If body image issues cause you (or someone you know) distress and interferes with your daily activities, seeking help from a mental health professional is a good idea. A counsellor may be able to help with the underlying problems that lead to body image issues. And in some cases, treatment for anxiety and depression, prescribed by a psychiatrist, can help alleviate distress related to body image.

The good news is that there is plenty of hope – with help, body image issues can be managed. Bollywood actor Ileana D’Cruz has spoken publicly about how she was once on the verge of committing suicide because of her struggles with body dysmorphia, but working with a therapist helped her address the problem and raise her self-esteem. At a congress on mental health, she once said, “Imperfections are a part of life and one should learn to love who you are. You are a human being and are allowed to be imperfect, and you are allowed to be flawed.”

“How to Love Yourself When You Are Asked Not To: A Conversation With Supriya Joshi”

“You Might Not Notice it…But I Do: Shame and Cosmetic Surgery”

“How Many Bones Would You Break to Get Laid?”