Pictures and stories by Anushree Fadnavis

The nights are full of women, going about their business, whether work, or pleasure or a mixture of both, while you mind your own.

In these pictures Anushree Fadnavis takes in the ladies compartment of the Mumbai local train, all between 11 pm and 4 am, women enjoy the breeze, their own clothes, their friends, their phones, being out, going home, something or everything. #AintNoCinderella, just Shehnaz, Shanta, Sabina, Sabrina, Monica, Sangeeta, Shakku, Reena, Madhu or whatever name they claim for themselves. 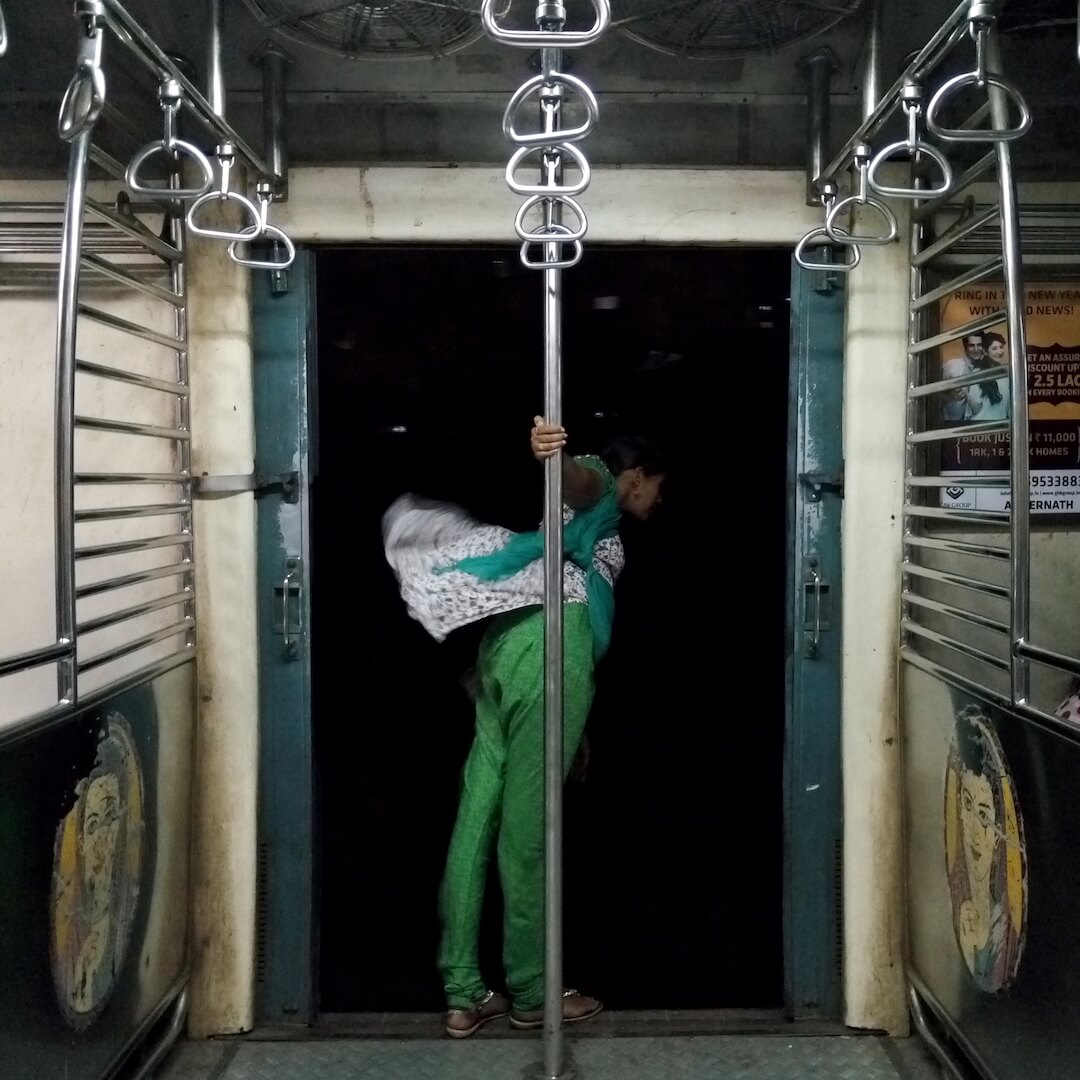 A woman leans out of the running local train. She seems free as a bird. 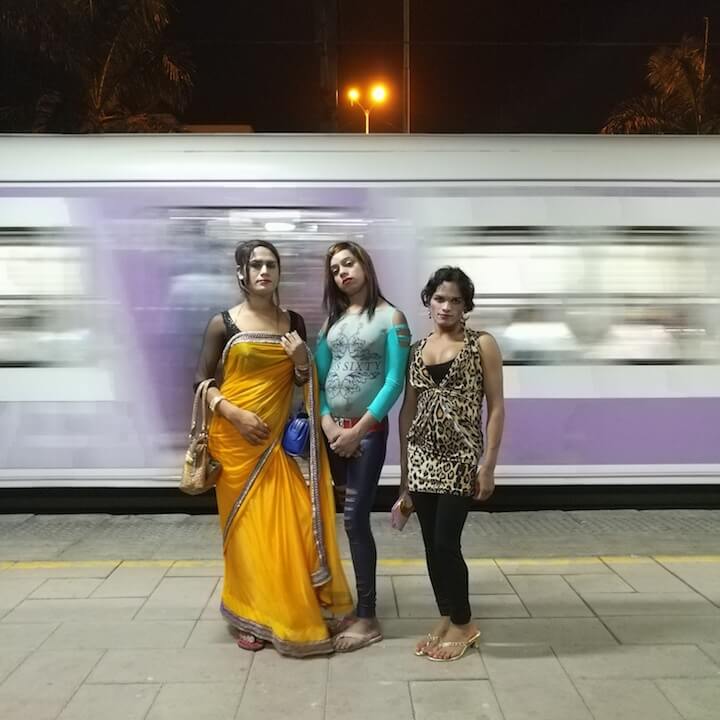 Somiya ( 18 years), Archie (20 years), Nishu (24 years), who identify themselves as Transgender, pose for a picture for me on a platform.  They said they were on their way to work at a dance bar. 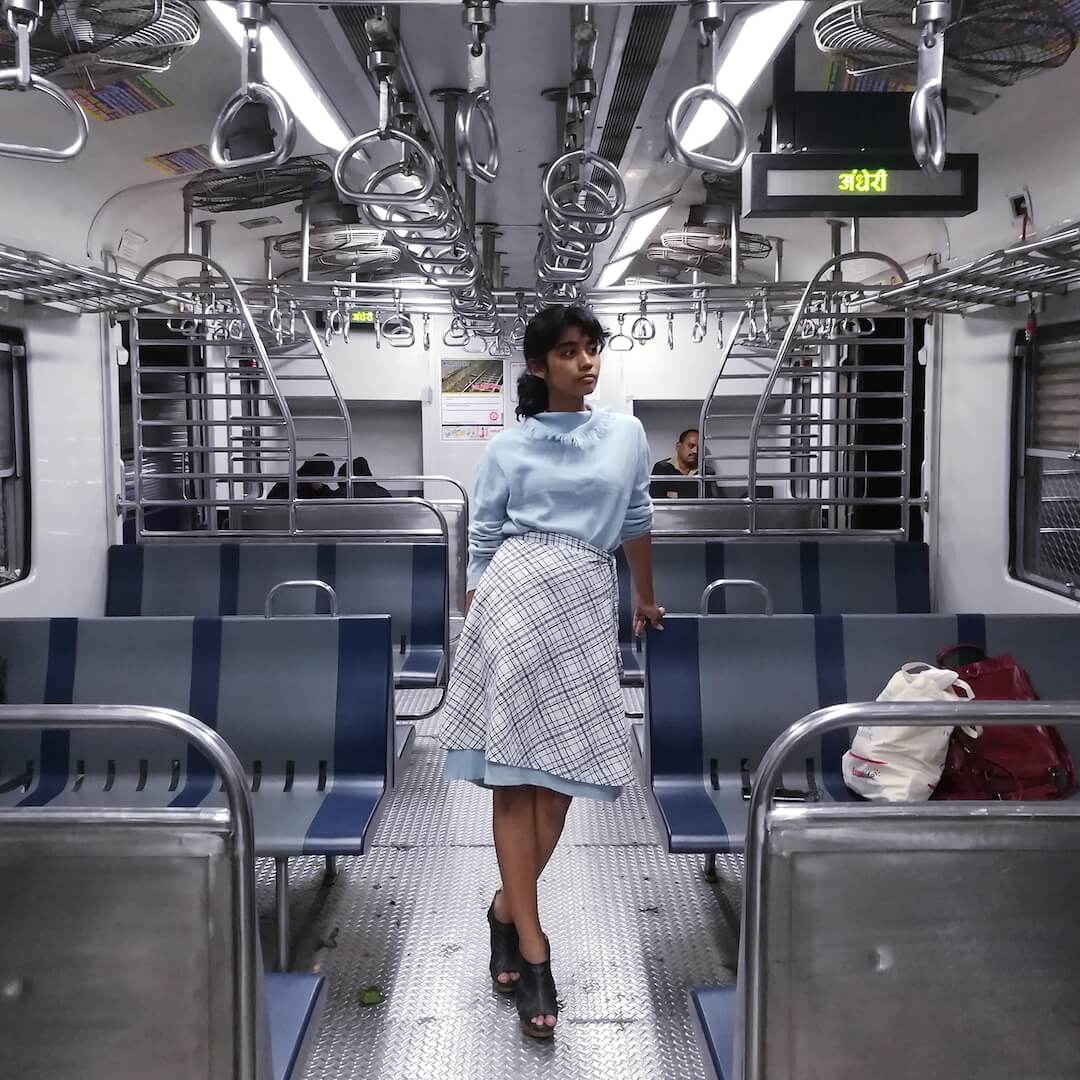 Yvonne Monteiro poses in the ladies compartment of the Mumbai local train, with such elegance and poise. When I asked her for a picture she recognized me and agreed quickly. I loved her dress and shoes which she carried of so gracefully. Two girls lean out of the running train.Two girls sit it out. One girl looks at me taking the picture. 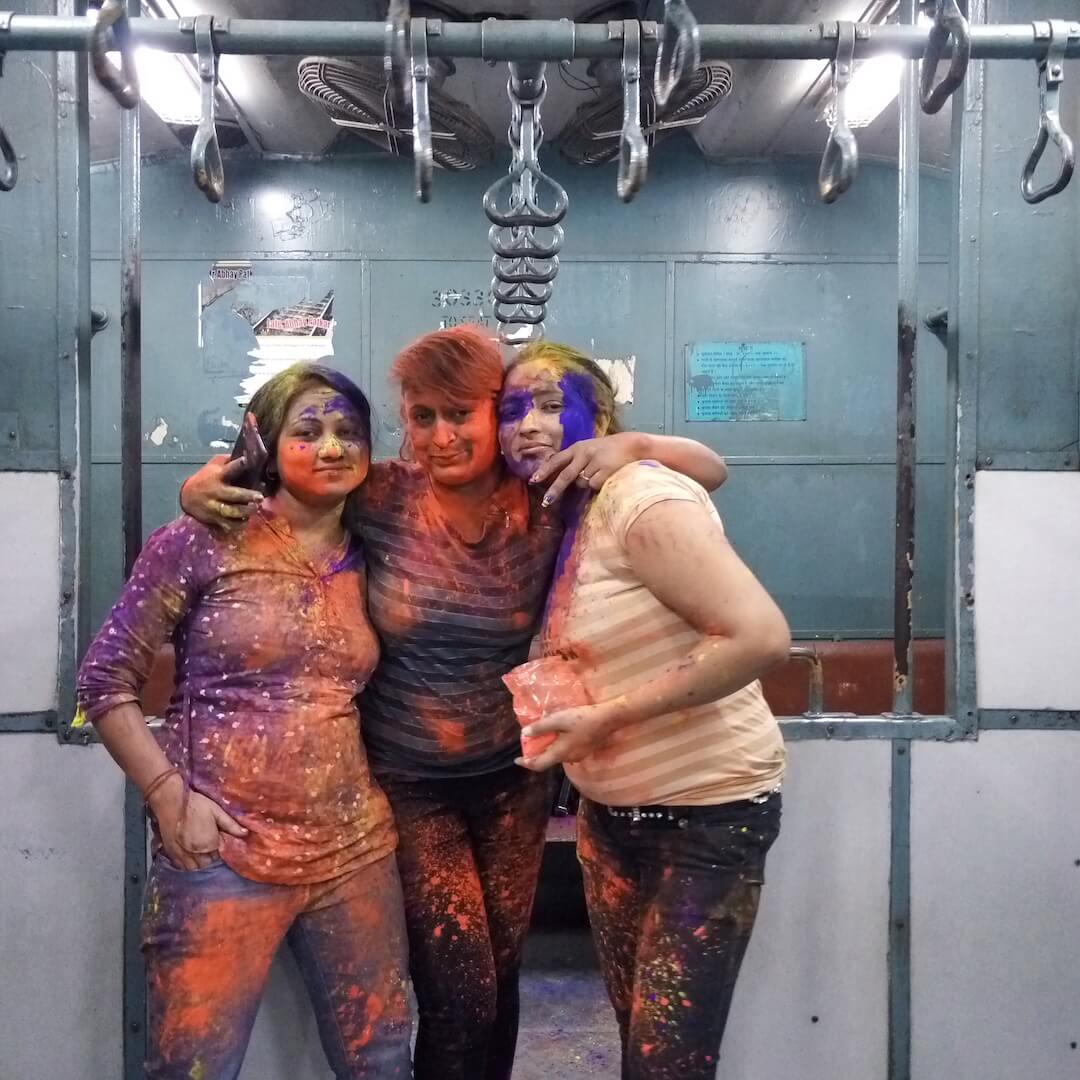 Priya, Deepa and Sarika pose for a picture after smearing color on each others faces last Holi. Sarika told me she is Muslim but she has been playing holi since her childhood. She loves playing golf. She was running across the compartment trying to smear her friend’s face with colours .
After we spoke they all took turns to colour my face and my hair too😁 Priya, 23, identifies herself as a transgender.

I met her a few nights ago. She had a shawl to cover herself. But I noticed her dress and complimented her. She told me that she bought that dress from Amazon alongwith two identical ones in other colours. I said I loved this colour a lot. Priya has studied Industrial psychology which is 3.5 years course from Mithibai College, a reputed college in Mumbai.

Priya has also worked as an AD on a few serials of Balaji productions. She is trying to get into acting now. She used to work in cosmetic industry in Mumbai . She told me she had to face sexual harassment from some men at her workplace. The women were nice to her but the men did not respect her. Alot of people, especially men, in train also pass filthy comments . I told her I have seen that happening. She also said sometimes few men judge some people who talk with the transwomen. She said, “We can increase awareness but can’t change someone’s mind or thinking. In the film industry I didn’t face any issues but in corporate world we do need to increase awareness .” 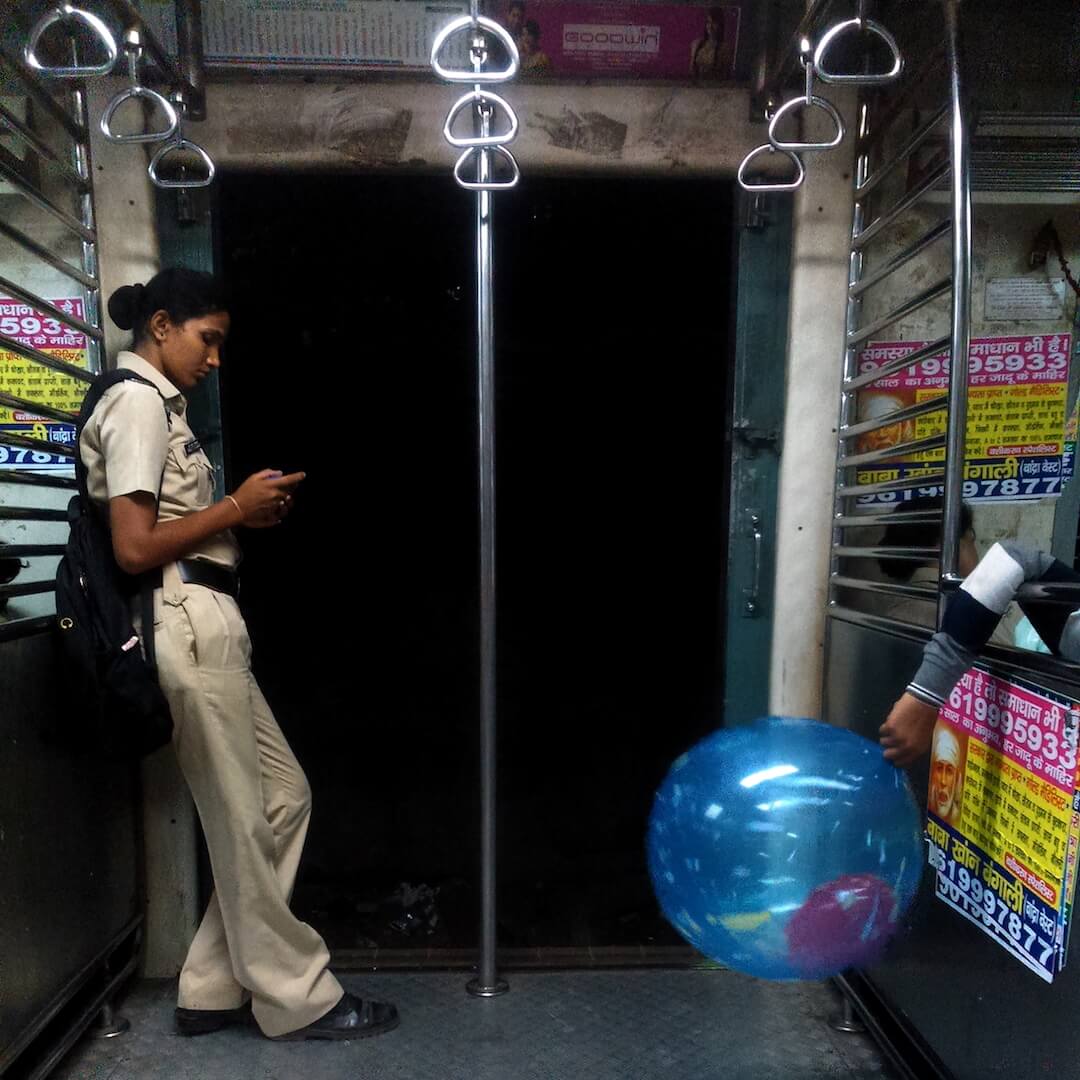 A policewoman returns from her duty on a late night local. 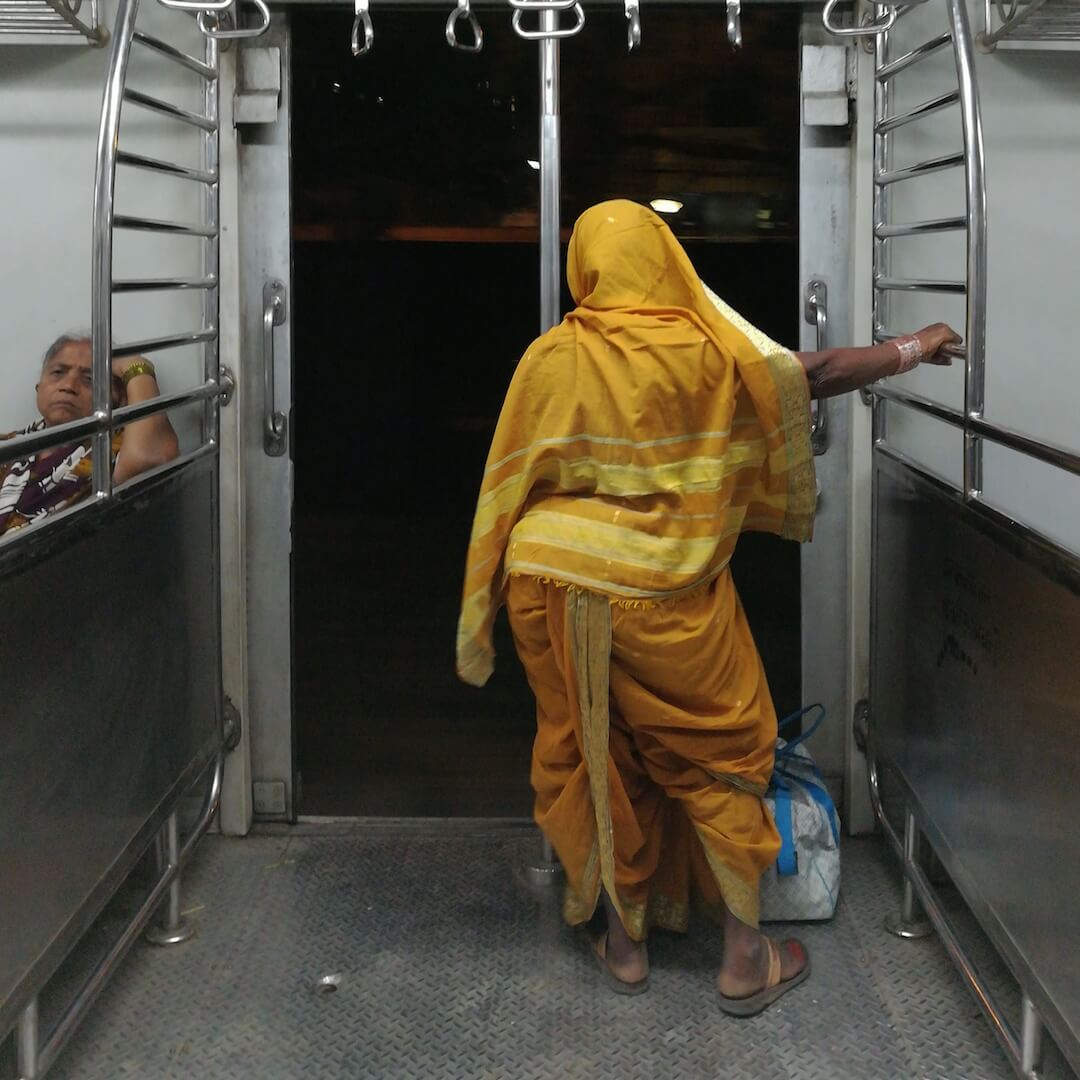 A lady waits at the door for her stop. 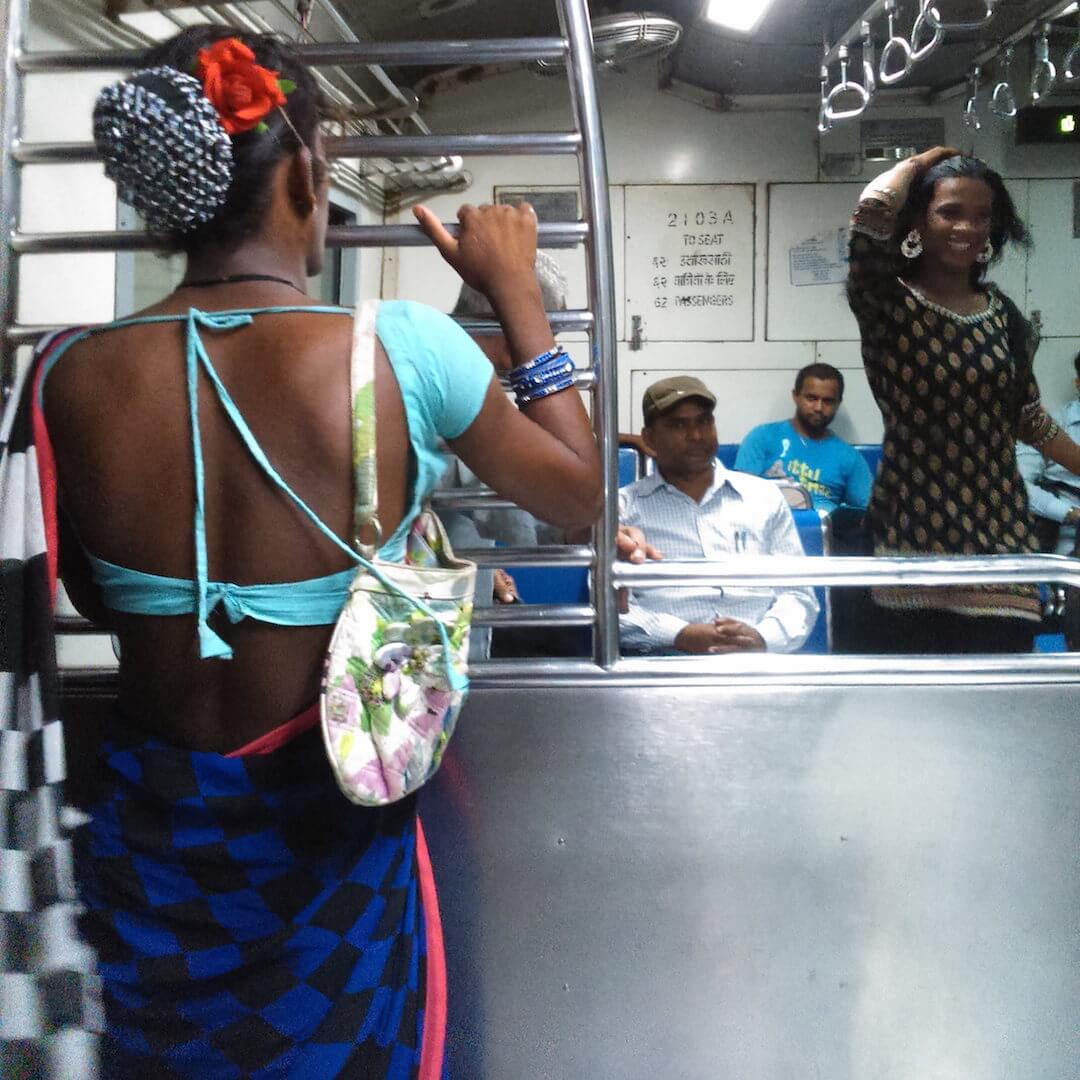 Radhika, transgender, a rose in her hair,  watches her friend Jaya, also transgender, as she interacts with people in the Mumbai local train. 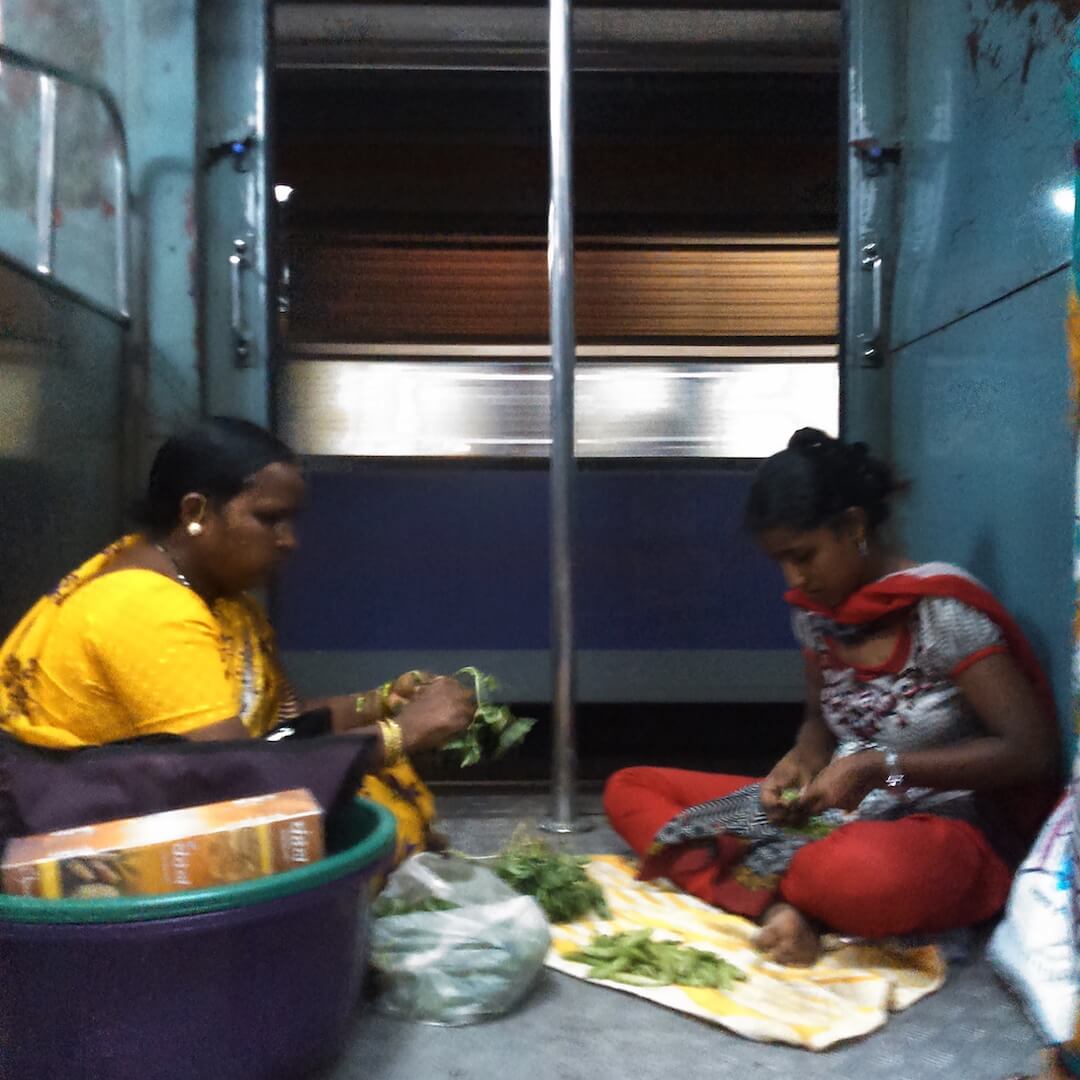 Sunanda and her 18 year old daughter Deepali sort vegetables on the local train.  Fruit sellers, their day starts very early. After 12 to 14 hours of work they sort vegetables on the ride back to save time, so that once they reach home they can cook right away. It’s a familiar sight on the local train, especially when you live in the further suburbs like Vasai or Bhayander and work closer to downtown. Bobby Dev.  Model and an actress. One of those late night empty trains. She stood out in the crowd and I wanted to know more about her. Who she was. Why was she traveling so late. Where is she coming from. I was not sure whether she will allow me to take a picture. But she agreed. Her station came before she told me much about herself. I got her number and called  and messaged, wanting to know more about her. But she was always busy . 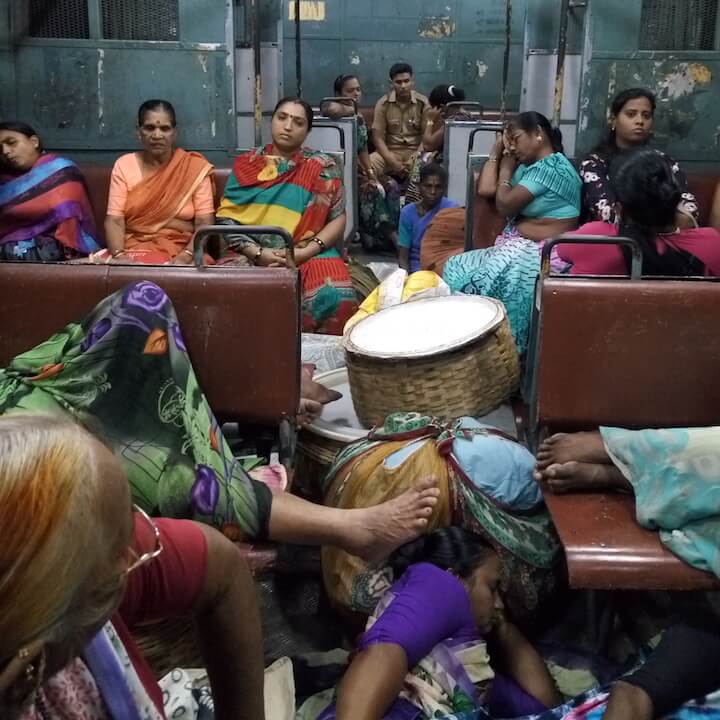 Koli women make a 1.5 hour journey to South Mumbai to buy fish at the docs every day, which they come to sell in their villages  They take the first local train from Virar station at 3.25 am and catch some sleep on the way. 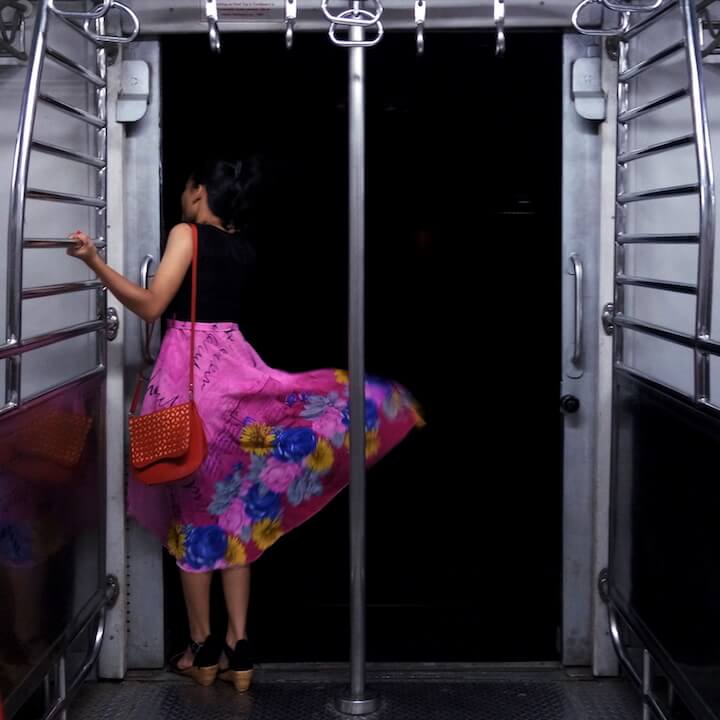 A girl is seen standing at the door in the ladies compartment of the Mumbai local train.

Anushree Fadnavis lives in Mumbai, India and works as a photojournalist with the news agency Indus Images. Her work , commissioned and personal, both have been published in various Indian and international media.