Lips pursed and incisors out like a rabbit, he was making a face on the video chat. The screen froze because of my unreliable WiFi, but I could still hear his voice—”So handsome, am I right?” From laughing hysterically to just staring at the screen, within moments I was consumed by this overwhelming sense of sadness. Was it always going to be like this?

Recently, I got back with my ex-boyfriend. The kind of advice I expected to receive from friends and family when he first messaged me was, “Girl, you broke up for a reason.” Instead, all my loved ones unanimously opined, “You are so going to get back together.” I brushed them off—this was just a harmless reconciliation with an old flame after a two-year hiatus.

Soon enough, proving everyone right, we made a trip to Thailand. As if working on a puzzle, we put our relationship back together.

We first met at Chemistry tuition in Class XI, where he sat ahead of me. Sporting two ponytails and a nervous disposition, passing the subject with minimum grades was my only aim, I wasn’t really there to make an impression. We interacted for the first time when he added me on Facebook in our first year at separate colleges in different cities. When we finally met, we shook hands. Over the long-drawn months that we didn’t see each other, Facebook chats and awkward Skype calls kept the momentum going. Somewhere in between, he had called me up, heaving on the phone, nervous, yet getting straight to the point. That he loved me. That I could take all the time I needed to think about it and he would wait for me. I had just joined my first job and he had three years of law school left when we decided to try long distance for the first time.

S and I have a history. Of fighting and breaking into laughter moments later. Of liking the same food, disliking the exact same vegetables and sharing an all-consuming love for coffee. We constantly aspired towards cracking the best ‘that’s what she said’ jokes and agreed to disagree on who the winner would be. He made me feel invincible, like the best version of myself who could laugh freely and eat without thinking about her burgeoning waistline. One of the first few times he met my parents, he told them that my inherent ability to put pen to paper would take me places. And I sat watching them—in rapt attention, finally convinced that their daughter was not a complete loser.

Shortly after that incident, I went abroad to pursue my Master’s, leaving him in the lurch. Homesickness, a classroom where no one looked like me, the frigid cold of North East England had somewhat convinced me that I needed a clean break from my past to unleash myself into this strange, unchartered landscape. I had broken up with him repeatedly over phone, emails, WhatsApp messages that stretched into essays. My words had left him in deep throes of depression after I had paraded across continents to seek a new truth.

Sometimes, picking at the scabs of old wounds does more harm than good. Almost two years had passed when S got in touch with me with a harmless, “Hey, What’s Up?” message past midnight. I jolted up from my bed in anger because earlier when I had tried checking up on him, his dad called up my mother so that I would leave him alone. Now, the hesitation in his voice was apparent, yet this was him reaching out to me. The girl who had broken his heart, but whom he wanted in his life nevertheless.

Inevitably after reconnecting on foreign shores, I told him that I loved him and my admission didn’t feel out of place. I was extremely self-aware about repeating my old self, making promises I couldn’t keep. The guilt was exacerbated by his steady admission, “I never stopped loving you.” It was like coming home after an exhausting long hike and being greeted by the most comforting hug there is.

And yet again, we were back to the same place. Long distance 101. Him in Yangon, Myanmar. Me in New Delhi, India. Words getting lost and found in the stretched oblivion of sketchy internet connections, blurry selfies compensating for actual moments lived in each other’s presence, and voice messages offering us respite when our fingers ached from typing out every minute of our day. I am still third-wheeling on outings and house parties with my couple friends, he is still expertly avoiding the Indian expats who try their best to dissuade him from moving back to the country. In moments of acute frustration, I clasp my hand into a fist, open it, and back again, trying to remember how his touch feels like. I use his old Burberry perfume hoping that I smell like him. I try to remember as much as possible, so that every time we meet, I don’t have to begin the arduous process of getting to know him again. 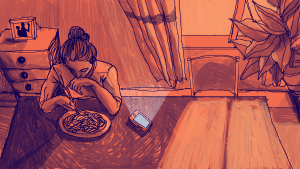 There is only so much that can be romanticised about a long-distance relationship and the magical reunion that’ll fix everything. Then, of course, it is back to square one. Sometimes all you want to do is reach out to the other side of your bed and find him there. And not have dinner in the deafening silence of your room. You want to live in the present, rather than wait for an elusive future that promises to be slightly better.

And yet that very idea is the one you cling on to. In dire moments, when I complain about my situation, my single friends tell me, “Be grateful. At least you have someone who loves you.” But it is not just being loved, it is the loving that is like fodder to my hungry soul. More than what I receive, what is it that I can give to this person who was ready to wait in spite of my mood swings and misdemeanours. What makes him so sure that I won’t take off again?

The loneliness of a long-distance girlfriend. We are trying to work the logistics out. But it is a long-drawn battle; time stretches itself like a rubber band, expanding till the horizon. And then it just snaps back to the pliant, harmless thing in the palm of my hand. Him coming out of the Arrivals gate. Me smiling my widest smile.

We can do this.

Amrita loves milkshakes, feminism and all things bookish. If she is not writing, reading or obsessing over Trevor Noah’s dimples, she’s probably trying to brush up on her eyeliner skills.