You thought it was only us modern cool types who thought about pyaar-vyaar, sex-vex and that kind of thing?

Aiyoh puh-leez! Indians have been infusing their art with a generous dollop of ishq for as long as they’ve been making it. Don’t believe? Try resisting the seduction of kathak, and the perfumed flowers that women pin in their hair as part of shringar, or of a big beautiful bowl of rasmalai! Ishq items are everywhere in our tradition.

Aao, dekhen zara who these pracheen agents of ishq were!

Oho. Aha. Now where to begin? From the most well-known of them all of course.

Long before Masters and Johnson, the Hite Report and Cosmopolitan, there was the Kama Sutra. Written in Sanskrit by Vatsyayana, who is thought to have lived in the 3rd century CE, it isn’t just a list of sex positions. That’s just one part of what it takes to lead a good, sensual life and the Kama Sutra is a large, sophisticated work that stresses on sexual pleasure for women as much as for men, talks about love, romance, relationships, desire, and family life, among many other things.

Here’s how Vatsyayana begins his chapter on kissing:

“It is said by some that there is no fixed time or order between the embrace, the kiss, and the pressing or scratching with the nails or fingers, but that all these things should be done generally before sexual union takes place, while striking and making the various sounds generally takes place at the time of the union. Vatsyayana, however, thinks that anything may take place at any time, for love does not care for time or order.”

The Kama Sutra isn’t the only book of its kind – matlab pracheen advanced sex-manual. The 19th century British explorer Richard Burton, who translated the book into English, writes that Vatsyayana refers in his work to ten other authors on sex, and Burton points out six other works on sex that followed the Kama Sutra, including the Ratirahasya (thought to be from the 11th or 12th century) and the Ananga Ranga, written in the 15th century. 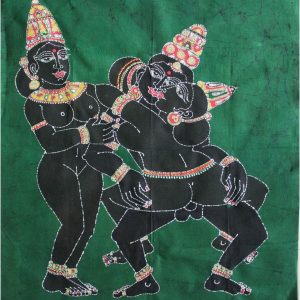 The poetry of Andal

Andal was a 9th century mystic poet in Tamil Nadu, and the only woman among the 12 medieval Vaishnava saints known as the Alvars. In their book Andal: The Autobiography of a Goddess, Priya Sarukkai Chabria and Ravi Shankar point out that Andal’s poetry is unique in demanding that Vishnu take her as a bride “not as a spirit but as a living maiden” and that she “sings of her individual need for spiritual and sexual congress with her chosen god and of an abundant female desire explicitly sited in the body which too is holy.”

Here is a verse translated by Chabria from “Tai Oru Tinkal”:

With fingers dipped in lampblack I draw Your name

On the wall, Ancient One. I draw prancing horses

For Your chariot that flies Your piscine banner and

Your bow of ripest sugarcane and exquisite women to fan You.

From childhood I longed for him alone, to him

I offer my growing breasts supple and full. May

Dvarka’s Lord cup my breasts. This is my prayer She sings while Krishna plays, her heart drawn

‘On my breast your hand Krishna

It is Love’s sacramental jar.

‘Drape my loins with jeweled belts, fabric and gemstones.

My mons venus  is brimming with nectar,

A cave mouth of thrusts of Desire.’

Reckless, inflamed, she presses forth

To the urgent campaign

Flips over and mounts him,

Savours the way he gives in… 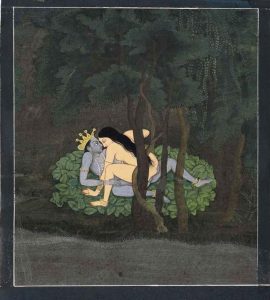 Mirabai was a 16th century bhakti poet and devotee of Krishna believed to have been born in Rajasthan. She’s captured people’s imaginations over centuries as a symbol of devotion despite suffering and persecution, though there exist multiple (sometimes contradictory) accounts of her life. When she speaks of Krishna, it is as of a divine husband that she longs to join:

Sister, the dark one won’t speak to me

Why does this useless body keep breathing?

Another night has gone

And no one has lifted my gown As Chenthil Nathan writes elsewhere on Agents of Ishq, “Sangam poetry draws its metaphors from nature, infusing the cycles of the external world with the poets’ inner thoughts. One of the most translated works of Sangam poetry (including by AK Ramanujan) is Kurunthokai, one of the eight anthologies of Sangam literature. It has 400 love poems by various poets.”

Here’s one juicy example from Kurunthokai:

If I fear slander, my passion will weaken;

if I give it up to avoid censure,

You see, my friend!

Hanging precariously but not falling down,

is my virtue that he partook. 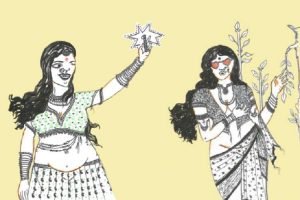 Muddupalani lived in the 18th-century, and was a poet and Devadasi in the court of the ruler of Thanjavur. Apart from writing about Krishna and Radha, she appears to have also engaged with the work of Jayadeva and Andal. Women Writing in India: 600 B. C. to the Present, edited by Susie Tharu and Lalita K, sheds some light on the Telugu-speaking author: “Unlike a family woman in her time, as a courtesan Muddupalani would have had access to learning and the leisure to write and practise the arts. She would have owned property and expected and enjoyed functional equality with men. Obviously, the esteem in which Muddupalani was held and the acclaim her work received can be attributed as much to the contexts, literary and social, she drew upon as to her own talent.”

Your sari slipped, your breasts heaved,

and your anklets trembled,

as your foot struck my head.

But my body trembled with ecstasy,

how can I describe this euphoria? This collection of love poems, considered one of the oldest existing poetry anthologies, is written in the gatha form in Prakrit, a language once spoken in Maharashtra. In a 2008 edition translated into English, the publisher’s description reads, “The speakers are mostly women and, whether young or old, married or single, they touch on the subject of sexuality with frankness, sensitivity and, every once in a while, humour, which never ceases to surprise.”

Here’s a taste from the English translation by Arvind Krishna Mehrotra: 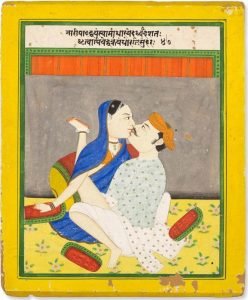 I saw the boy’s

If that doesn’t get you all hot and bothered today, centuries after some of these works were written, we don’t know what will!

We all know of the Taj Mahal as being a monument to ethereal love, built by Shah Jahan for his favoured wife Mumtaz. But there are several older monuments in which the ishq is more bodily.

The temples of Khajuraho

The figures at Khajuraho depicted having sex do it in every way you can conceive of (69ing, standing up and doing it from behind, blow jobs, and not just between heterosexual couples). Although they are carved on temples, they are not divine beings but human ones, and symbolise a merging of religious and wordly interests.The Khajuraho monuments, situated in Madhya Pradesh, are made up of a group of Hindu and Jain temples thought to have been built between the 10th and 12th centuries under the Chandela dynasty. Only a fraction of the original monuments still stands today, and although the name Khajuraho might conjure up images of monuments with wall-to-wall statues in 1000 sexual positions, in reality, only about 10% of the temple carvings have anything to do with sex. 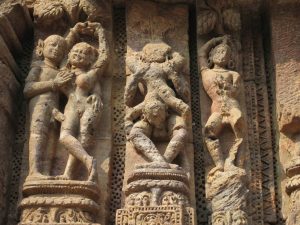 The temples of Hampi:

You haven’t lived until you’ve taken a tour of Hampi and your guide breaks off to say “doggy style” in English with no change in expression, pointing to a temple carving of two people getting it on!

Hampi is in central Karnataka, and was the centre of the Vijayanagar Empire in the 14th century. Today, it’s ruins are spread over more than 4,000 hectares. The Virupaksha temple in Hampi is its oldest shrine and unlike most of Hampi’s other medieval monuments, is a living temple – it continues to be used for worship today. Like many other Indian temples that depict a range of human life, from long pilgrim journeys, war and trade to romance and sex, the Virupaksha temple has a variety of carvings on its outer walls. One particularly striking image has a woman carved standing with her legs wide apart, her hands on either side of her vulva, while a man and woman stand on either side of her, turned on.

But it isn’t the only temple here to depict, um, Hampi-ing. Keep your eyes peeled, and you can play spot-the-sex-position while you’re there! There’s also the Vijaya Vittala temple, which has exquisite pillars that play musical notes when struck (plus some fascinating carvings of Chinese and Turkish merchants of the era), and has gorgeous carvings of sensuous dancers. 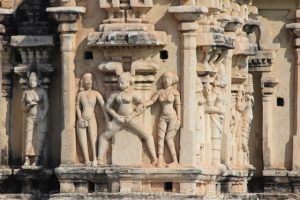 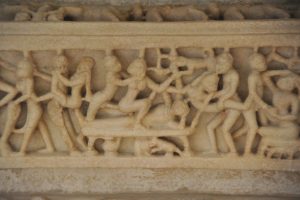 Have you seen the Ellora carving of Shiva and Parvati sitting in a manner both regal and cozy on a representation of Mount Kailash? It appears like a serious occasion until you notice Shiva’s hand snaking around Parvati’s slender waist to cup her breast.

Ever seen an enormous colorful painting of an eight-handed Krishna having sexy times with an entire host of women at the same time? And using his feet too for the aforementioned sexy times (one to massage someone’s crotch, and the other to pinch a woman’s nipple)? Perhaps it’s time you headed down to Kochi, Kerala.

The Mattanchery Palace, also known as the Dutch Palace, located in Kochi, was built by the Portuguese in the 16th century as a gift for the Raja of Kochi. A blend of colonial and Kerala architecture, the building surrounds a courtyard at its centre and has large murals indoors. These murals, in bright greens and reds done, depict scenes from Hindu mythology. Apart from the sexy Krishna mural, there’s also one of Shiva kissing Mohini while Parvati looks away. 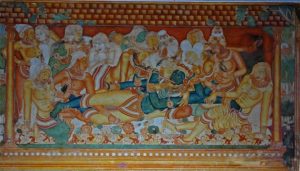