I Felt Humiliated for Contracting an STI But I Know I'm Touchable, Lovable and More-Than-Sexable - Agents of Ishq
Menu My inner thighs were having a field day with all my scratching. It was September 2015 and I had returned from a vacation to all this scratching. People scratch things periodically in Bombay — the holding poles on trains, sweaty hair, sweatier necks, each others’ back (metaphorically, too). I figured my itch was just a back-in-Bombay thing. I worked two jobs for 14 hours every day. So, sweat was life, life was sweat. But a week passed and I was still scratching. This time, scratching brought along redness to the party.

I’d suspected a urinary tract infection and drank more water than a fish does everyday. But the darn itching wouldn’t stop and gnarring redness had developed around my vagina. I was sexually active with my then-partner at the time and I began dreading the obvious alternative — a sexually transmitted infection (STI). Approaching my parents, who were both doctors, was out of question unless I’d decided I no longer needed a home. Doctor or no doctor, parents were parents and sex-shex was still hai rabba at home. Another hindrance was finding a doctor my parents didn’t know. I did not want to hear “hai mera Guddu tujhe kya hua wahan” from my friendly neighbourhood Doctor Uncle, only to come back home to murderous silences.

I was desperate. The scratching and redness was accompanied by pain; the likes of which I’d never experienced in my life. I approached a friend’s mother, a reputed gynaecologist, for help. I entered her clinic and I waited in incredible pain in a serpentine queue for my turn. The doctor, while efficient, was extremely busy. She took one look at my vagina and diagnosed me with Herpes Simplex Virus (HSV) 2. Since she was sure of her diagnosis, she did not prescribe any tests. In hindsight, I think this was a huge mistake. More on that later.

HSV2 is generally associated with unhygienic conditions and general lack of good personal habits. Or so I thought. Shame trickled its way in. I felt humiliated for having contracted this disease.

I was under intensive treatment for the next 10-14 days. The medication didn’t help with the pain, but it did arrest the infection. Slowly, the redness started reducing.

In hindsight, I will always be grateful to my then partner for supporting me through this ordeal. He came from an orthodox family and didn’t take the news too well. He was just as freaked out as I was and struggled to understand the source of it. However, he accompanied me to doctor’s visits and stayed by my side, throughout.

It’s been nearly two years since that moment at the doc’s. Here are the two things to note.

1. When I left the doctor’s clinic, I had no idea how I contracted this condition.

2. I was given no counselling. Just medicine after medicine.

Why didn’t I know where I’d gotten herpes? There was a significant gap between my last sexual activity and contracting the disease. Five months before coming back to Mumbai, I’d met someone during my travels and we’d enjoyed a casual fling that involved intercourse. But we were always careful about protection and I had no reason to suspect a history of STIs from him. Same story with my then-partner. All his test results for STIs turned out to be negative.

The second factor was even more harrowing. Listen up. I want to tell you what they never told me. If you’ve been diagnosed with HSV (1 or 2), counselling is and should be a part of your treatment.

HSV2 is highly painful and traumatising. A major percentage of my pain was caused by my own mental state. A good doctor will counsel your way out of it. Not only this, it is only during counselling sessions that you will be eased into understanding the long-term consequences of contracting some STIs. With no counselling, I struggled to wrap my head around the fact that the strain of HSV2 virus stays in your body forever. We’re talking about living an entire life with a little secret. I wasn’t ashamed of it, but it still makes for awkward conversation with every partner you have after — since it is my responsibility to inform them before engaging in any sexual activity.

I found out about this on good ol’ internet. A good doctor, through a counselling session, will ease you into this process and help you manage this situation (and it is manageable).

Internet diagnosis can be dangerous but in my case, it had its merits. As much as WebMD increased my paranoia, I am actually grateful to have access to this information. Otherwise, I would have never known the baggage the disease brings, would have never sought further counselling, wouldn’t have read accounts of other people suffering from the disease. And I wouldn’t have known if the terrifying visuals of the sores during the outburst was normal. The doc didn’t prepare me for just how unsightly it was going to be… I needed to see it on the internet to know if it’ll pass.

My suggestion to people suffering from these diseases is that they should speak to their physicians about what they research online. Being a more educated patient helps you ask the right questions in the often limited time one has with a doctor, as was with my case.

What followed post-diagnosis was unquestionably the most emotionally draining two weeks of my life. Obviously, I could not go home — I was sure my parents would figure that something was up.

So I had to spend my days oscillating between my then partner’s office and my friends’ homes. In pain. And no sleep. And did I already say, pain? In case, I haven’t made it clear already, pain is the only component of STI life. It is the sugar, spice, everything nice and chemical X. 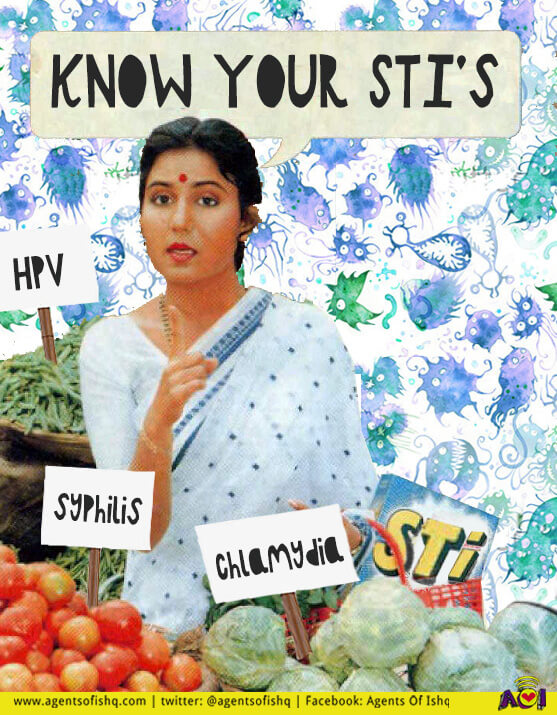 In the attempt to discover the mystery source of my infection, I did what I cringed hardest for. I called up some of my exes. I was thankful having made good choices in life when they all responded empathetically and with maturity. All the ghosts of the STI past cleared their tests. The source of my illness was still a mystery. But  phone calls led me to launch into another self-inflicted slut-shaming spree. It isn’t a nice feeling to shaadi-waali aunty yourself into questioning your sexual choices.

Just as I was leaving the infection behind, I contracted secondary problems — yeast and fungal infections. By now, I’d completely lost my mind. I was done. I was ready to buy a new vagina. But no one told me how.

A few months after the treatment, by which time the herpes outburst had receded, I went to a dermatologist. She told me that there wasn’t enough evidence to conclude that I’d indeed contracted herpes (at the time of meeting her). Her suspicion arose from the fact that I never had recurrences, something that’s fairly common with HSV2 patients. She suggested that some herpes viruses can be contracted as a child, can stay in your body and get activated when you become sexually active. My gynaecologist hadn’t’t informed me about this. Zilch. Neit. Nope. None.

Treatment upon treatment, a mountain of medicines and counselling later, I reached a stage where I managed my history with the virus and learnt to build my sexual and mental life around it. It took a lot of carefully monitoring my habits and regular check-ups to keep my physical health in check. Mentally, I taught myself to not make this central to my life. Today, I feel comfortable talking about this to close friends because I know that it does not define me.

As for the stigma, most of it is a result of all the conditioning we grow up with. STIs should not be taken lightly. But in our fear of avoiding STIs, we end up avoiding educating ourselves about it. Don’t go into the light is terrible advice. Don’t listen to Hollywood. Go into the light and know your body.

HSV2 changed the way I approached health and hygiene and in a lot of ways, the way I live my life today. Condoms do not guarantee safety, but once you’ve had a taste of what it’s like to be unsafe, you’d take every safety measure out there — even if some them come with false bottoms.

It would be easy to believe that STIs spread only due to casual dating or through having multiple sexual partners. While there may be truth in being responsible with quantity, please note that people in monogamous relationships, too, can acquire STIs. I am one such example.

I am touchable and lovable and more-than-sexable. I am also responsible. Don’t wait to learn it the hard way on how to be all these things at the same time.

Trishya is a writer. She oscillates between being anti-fascist and anti-red velvet cakes. She an unhealthy affection for Beck.