How To Have THAT Awkward Conversation - Agents of Ishq
Menu Has this ever happened to you?

You’re in bed with someone you find very attractive. It may be your first time or not. Everything is steamy and romantic. It’s raining outside. You’re both turned on, and everything is going well until that one moment.

When your lover does that one thing.

They’re touching you wrong, or not enough or too much. Or it hurts.

Whatever it is, suddenly the mood is gone and you’re wondering how to get home quickly. You’re thinking about anything but the person in bed who’s most probably still doing the thing that killed the mood.

What to do now?

Are you’re feeling ki “This never happens to anyone else. Why me?” You are not alone.

Every romantic movie made tells us that being attracted to someone means best sex. Ever. Clothes come flying off, you slide down walls, bang against doors, fall into bed, and then everyone has amazing sunset-coloured orgasms. Unfortunately, in real life, sex doesn’t quite work that way.

It happens to everyone. Everyone has been startled or fed up by something that their lover does in bed. And perhaps in another situation, you’re the one doing that one thing that kills the mood.

You’re wondering whether there is really any nice way to say, “Can you stop poking me while you’re trying to finger me?” The kind of conversation that makes you want to run away and change your number from Airtel to BSNL.

But don’t. Let us hold your hand in this difficult moment. Here are some ways you can get your lover to stop what they’re doing, and do what you like instead.

Whatever the problem is, don’t keep telling your partner you’ve had the best sex when you didn’t. They’re going to think they’ve done everything right, and the next time you’re in bed together, they’ll probably do the same thing again.

Men usually orgasm much faster than women. For most women, it’s a combination of different things that help them orgasm — often, vaginal penetration isn’t enough, and women also need clitoral stimulation. A lot of women feel like, how can I ask my lover to do more work? As if you are asking him to cook you an elaborate meal when he has already eaten. Instead, it becomes easier to pretend it’s great and carry on. Sometimes there is the pressure to tell your anxious, eager lover that you did have an orgasm when you really didn’t come even close.

Nikita, 20, used to pretend to orgasm with every man she’s been with, mostly because she was bored and wanted the sex to stop. And just like praising not-good sex, faking orgasms isn’t going to magically make the sex better. It took Nikita her first really good orgasm with a partner to realise she couldn’t keep faking it anymore.

Communication is key. No, that is not just a line from your CAT coaching class. It’s really true for more enjoyable sex. But like us, maybe you’re saying that’s all good and we know this, but how do you communicate?

Rhea, 25, had a boyfriend who enjoyed getting oral sex from her and he liked it to go on for a long time. Plus, he wanted oral sex each time they had sex. On the other hand, he never offered her any. When she brought it up, he said patronisingly that he’d “give it a shot”, and when he did, he bit her hard. “I shouted and asked him what he thought my clit was,” Rhea says. She finds it funny now, but that was the end of that relationship.

Rhea says she learnt two things — that she didn’t like men who acted entitled when they wanted something in bed, and that she needed to figure out how to tell men what she wanted. She says she’s noticed that during sex, women tend to show what they want, while men say it aloud.

If you’re more comfortable showing, then do so, but if it doesn’t get a response, say it. Now, Rhea has changed her strategy. She has learnt to say aloud things like, “I’m sensitive there, I like being touched here,” and guiding her partner’s hand around to what she wants and where she wants it.

In short, Rhea’s strategy is to clearly say what she likes, rather than telling them clearly that they’re doing it all wrong.

For Rishab, 28, who is bisexual, showing seemed better than telling too. He likes very specific things in bed, so he began to show lovers what he liked, by doing it for them so that they knew what it felt like. But not always. “It’s usually worked. The one time it didn’t was when both my partner and I were trying to do this at the same time. Neither of us got what we wanted,” he says.

Nikita used to worry that saying what she wanted in bed would kill the mood and make her seem like a PT teacher. But she realised soon enough that she could tell her partner what she wanted in a way that seemed spontaneous (but wasn’t) because it actually added to the mood. It excited both her and her partner to talk about what they were doing.

Nikita says she doesn’t mind saying something to her partner beforehand. “I used to wonder if that was presumptuous, but then I found that talking about sex excited us,” she says.

Another way is by starting a cozy conversation post-sex and asking your lover what they liked. Then you could also tell them what you liked, making it a mutually-beneficial conversation. But if they’re doing multiple things wrong, it might be better not to discuss all the problems in one conversation; that might not go very well.

Tip #4 What is your style number, what is mobile number?

Tarun, 21, says he’s always felt that saying something after sex is just going to sound like he’s complaining. “Is there ever a non-rude way to say that was good, BUT I wanted…?” So Tarun’s go-to method is to text, because that doesn’t involve actually telling his partner what he wants in person. It gives them some room to deal with any embarrassment they may feel. It’s a good idea to state it as a suggestion, not a criticism, so that gives your partner a chance to figure it out rather than feel schooled. Also texting your suggestions about what you like or don’t like in bed has the happy possibility of turning into a hot round of sexting, which could lead to a hot round of sex. See, communication is key!

Sometimes you’re uncertain about telling someone what you want. You may feel shy or you may not know the right words. But you can always show them, by having them watch you demonstrate what feels good.

Like Nikita, Shreya, 24, too says that she has never been able to say what she wants aloud; that it makes her feel conscious. That was until a guy told her he liked watching her pleasure herself. She found that this felt good because she knows what she likes, and in the process, he learnt it too. It was quite unlike her friend who couldn’t tell the guy she was with what she liked — until he moved to another city and they had Skype sex sessions. She used them to show him what she liked, and well, he took notes.

A fun way to show your lover what you’d like is by asking them if they’d be open to trying something with you, as an experiment. It can open up more conversations, giving you more space to talk about what you like, while also trying something new. 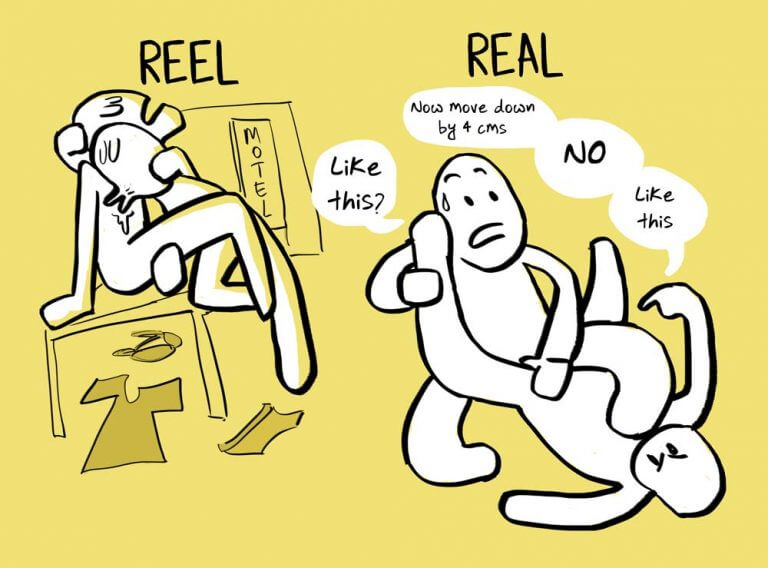 You have tried all kinds of methods but you can’t get your lover to change the overall style or even stop doing that one thing. Is this THE END?

There’s no easy way to answer this. Everyone’s going to tell you different things. If your partner is really great, then this gets much harder to answer, but sex is important, and you have to make a decision.

Rhea, for instance, says bad sex is as big a deal breaker for her as anything else, “I don’t want to feel resentful, and I know it’s not working when it hasn’t got better after three tries.” Similarly, Shreya says she won’t have bad sex with a person she doesn’t like a lot. And if she really likes them? She is willing to teach.

But Tarun thinks there’s only so much you can teach a person. “I can satisfy myself so what does bad/average sex matter?” he asks.

Now that seems like a big question to answer. But whether you want to stay or go is up to you in the end. That’s the big question — but the smaller question of how to tell, you know the answer to, so whatever you ultimately decide, at least you’ll know that you did your best.