Circumcised Or Uncircumcised - What's Sexier? And Other Questions You Were Embarrassed To Ask - Agents of Ishq
Menu “Pulling the foreskin back is a bit scary for me, I’m always worried I’ll pull it too far back and hurt him. When he’s circumcised, it’s somehow easier because I don’t have to take the call!”

“Everyone in my family and community has it done, so I consider it quite normal. The first time I saw an uncircumcised penis I had a shock.“

“In the end it actually matters very little. Everything depends on if he goes downtown or not.“

“I prefer circumcised over the other, but also uncircumcised is interesting, because it is unlike mine.”

We’ve all heard the word circumcision and know that it’s something that is done to the penis. But often it’s a bit mysterious. It’s not uncommon to hear beliefs that circumcision involves a permanent damage to the penis, affects a man’s sexual pleasure and even that it makes one “less of a man”. Men who have been circumcised have a completely different take on it and often can’t imagine their lives (or penises) in any other way.

So what exactly is male circumcision, and why do people get it done?

Circumcision is the removal of the fold of skin that covers the head of the penis when it is not erect. This little fold of skin is called the foreskin. The foreskin can vary in length, so it can either partially or fully cover the head of the penis when it’s erect. Some people are circumcised as soon as they’re born, while others get it done later in life for medical reasons. Outside of religious reasons, Dr KS Shivakumar, an andrologist and urologist based in Bangalore, says circumcision is usually performed if there is a blockage in the urethral opening by the foreskin, or other abnormalities in the length of the foreskin or size of the urethral opening. He also says that it’s prescribed in cases where the foreskin does not pull back completely, leading to difficulties in intercourse and urination.

He also mentions that one of the first and most common side effects of diabetes is a repeated infections of the glans (or the head of the penis). Since diabetes is a lifelong condition and you can’t be on antibiotics your whole life, a circumcision is prescribed in these cases as well to reduce chances of infection.

Why do some people say circumcision is good for hygiene?

Dr Ramesh Rajashekar, a Mumbai-based general practitioner, argues in favour of circumcision as it can increase general hygiene. When the foreskin is intact, it can cause secretions and urinary debris to collect under the skin, and that increases the chances of an infection. So circumcision is prescribed to prevent infections caused by the papilloma virus (or HPV), and is usually recommended in cases of repeated and frequent infections by the virus.

Dr Rajashekar says that it’s best and easiest if the procedure is performed early in life, but it isn’t considered medically necessary for everyone to get circumcised. That being said, Dr Shivakumar says that in a day (at his clinic), he’s prescribed a circumcision to three different patients: a boy of six, a man aged about 30, and another aged 84. He says that it’s one of the most commonly performed procedures in the world. 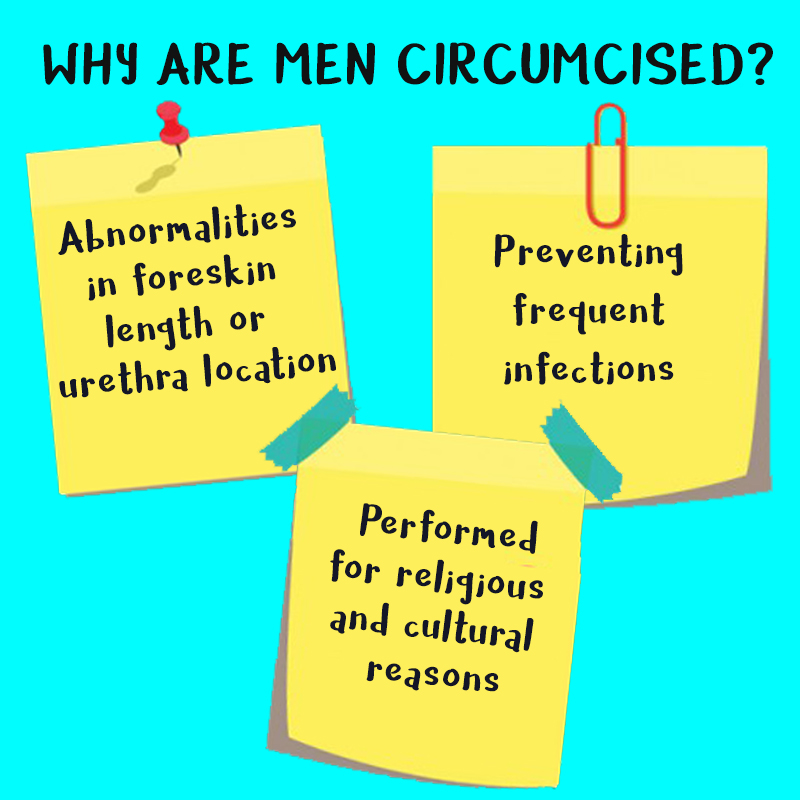 In some cultures and religions, all boys are circumcised soon after they’re born, regardless of any medical conditions. Ayaz, a journalist from Pakistan, says that circumcision is known as khatna among his community (Urdu-speaking mohajirs from Delhi). In his community, circumcisions are performed on babies almost immediately after they’re born. A celebration called an aqiqah, which means to celebrate the birth of a child with a sacrifice of a goat, tends to coincide with the circumcision, and is an occasion of great joy and celebration in the family. Because it is done so early in life, Ayaz says, men have absolutely no memory of the event or any associated pain around it. He has certainly not experienced any pain afterwards.

Unlike Ayaz, Avinash, a Bangalore-based engineer, does remember the events around his own circumcision. He underwent the procedure for medical reasons at the age of 10. After he met the doctor several times for repeated infections and difficulty in urinating, it was recommended that he be circumcised to prevent these problems in the future. Neither the doctor nor his parents pressurised him to do it, he says. He made the decision to undergo the procedure and remembers being very scared right before it was done. “I thought they might cut half my pleasure point!” he says with remembered panic. But once he woke up from the hour-long procedure, he could see for himself that they had certainly not cut half his penis, or anything like that; it was just the upper foreskin that had been operated upon. The pain wore off completely in about a week.

Doctors, and men who have been circumcised tend to agree that there are no long-term medical side-effects to getting circumcised.

But what we really want to know is, can it affect sexual pleasure?

Several men and women, who have sex with men, told us that they prefer the look and feel of circumcised penises. Some say that when dealing with circumcised penises, where the foreskin is already pulled back, they feel more comfortable because they don’t have to make the decision of how far to pull the foreskin back during sex. Many also say that they notice that circumcision makes the penis seem cleaner to them, as there is no build-up of smegma, which is an accumulation of skin cells, oil and moisture. This makes them enjoy performing oral sex even more.

Some of the people we spoke to also felt that that circumcised partners experience more sensitivity, which automatically leads to more passionate, therefore more mutually pleasurable intercourse. The feeling your partner is enjoying himself or herself—whether circumcised or not—usually means a more fun time for you as well.

But, as we sometimes find out the hard way, more sensitivity need not always be a good thing. Robin is a sociologist whose sexual partners are usually male. He says that he sometimes wishes his penis wasn’t as sensitive as it is, because if it was less sensitive, he wouldn’t ejaculate as quickly during masturbation. He wonders if circumcision could have anything to do with it. But then on the other hand, Dinesh, a queer engineer from Bangalore, says the exact opposite: He feels that uncircumcised penises are more sensitive to pleasure as they have not been exposed as much as circumcised penises. Wait, so what does it all mean? Does it make sex better or worse or what?

It’s especially hard to tell in exact terms how circumcision can affect sexual pleasure in comparison to being uncircumcised, because most people are circumcised way before they are sexually mature. So then it becomes hard to pinpoint exactly if your range of sexual pleasure is greater or smaller than anyone else’s, because this is all you know and remember. Even scientists seem confused about the matter, with one study saying that circumcision does not affect sexual pleasure, while another one says that it does. The men and women who sleep with them, however, seem to have many good things to say about what circumcision does for them.

But all these different and sometimes conflicting opinions tell us something that’s always important to remember when talking about sex and sexual pleasure—that there is no one single right answer! Different things work for different people at different times, ages and environments. In terms of sexual pleasure, there is absolutely no one-size-fits-all.